AudioBook Review: Bad to the Bone by Nicki Bennett

Posted on October 24, 2018 by thebloggergirls 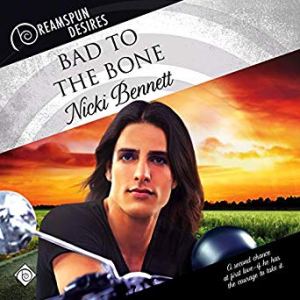 Alex can’t think of himself as anything but a failure. In high school, he was on the fast track to a career in pro football when he forged an unlikely friendship with a half-Comanche boy from the wrong part of town, Ricky Lee Jennings. Their shared love of books could have grown into more—but a homophobic teammate attacked Ricky Lee, and Alex wouldn’t risk his scholarship to defend him. Ricky Lee was kicked out of school, and Alex never heard from him again. Now Alex’s glory days are nothing but a memory. An injury ended his football aspirations, his marriage fell apart, and his dreams of making a difference as an environmental lobbyist are as dead as his fantasies of sports stardom. But all that could change in one magical night, when Ricky Lee shows up at their high-school reunion.

New author for me, and the sample for the narrator, Colin Darcy, sounded good, so I decided to give it a whirl…and I am really glad that I did. I love a good reunited love story, and I love when the underdog comes back bigger, faster, stronger, and richer than his bully. We get this in Bad to the Bone, and so much more.

Alex and Ricky Lee were high school best friends and lovers. Until bad decisions forced Ricky Lee out of town and Alex was left without his promised future. Years pass, and though Ricky Lee never replied to Alex’s letters, he unexpectedly comes back to town to see Alex, and makes a big scene during their high school reunion. The lust and desire are still there. It is obvious that even though they have both had other relationships, one even got married to a woman, they still love each other.

However, the reason Ricky Lee was considered bad to the bone was more his Native American heritage and his is no-good father. The poor kid had the cards stacked against him and no one in his court to back him up.  But Ricky Lee comes back with a secret, and though the town is still caught in their backwards and bigoted ways, he and Alex come out on top.

Colin Darcy does a great job narrating this story and bringing both Alex and Ricky Lee to life. I was not expecting his deep Ricky Lee voice, but it grew on me pretty quickly and by the end it fit him perfectly. As an audiobook goes, this one is not very long so you are moving along at a pretty good pace. This is a case where much could get lost in the speed, but Colin does a stellar job keeping the listener engaged and left rooting for the good guys to finally finish first.