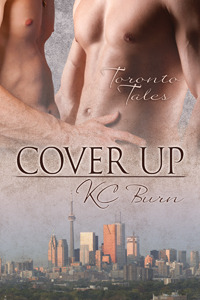 Blurb: Detective Ivan Bekker has hit rock bottom. Not only is he recovering from a bad breakup with a cheating boyfriend, he’s also involved in a drug bust gone bad. Ivan had to kill a man, and his friend was shot and is now fighting for his life. Though Ivan is under investigation for his part in the shooting, his boss sends him on an off-the-books undercover operation to close the case. The timing is critical—this could be their chance to plug a leak in the department. Off-balance and without backup, Ivan finds himself playing a recent divorcé and becoming Parker Wakefield’s roommate. He finds it hard to believe that sweet Parker could possibly be a criminal, much less have ties to a Russian mafia drug-trafficking operation, and Ivan lets down his guard. His affection is unprofessional, but Parker is irresistible. When Ivan comes across clear evidence of Parker’s criminal involvement, he has to choose: protect their relationship, regardless of the consequences, or save his career and arrest the man he loves.

Just off a recent drug bust gone wrong and forced into administrative leave, Ivan is thrust into undercover work of an unorthodox investigation of a possible drug dealer. A simple assignment that’s just supposed to be about gathering evidence becomes difficult when Ivan’s suspect, Parker, is exactly the kind of guy Ivan wants as a life partner and Ivan has no one to back him up if things go wrong. With trying to navigate around his attraction to Parker and still dealing with the after affects of the drug bust, Ivan’s fears that Parker really is a criminal becomes overwhelming and puts Ivan in a position to either save himself or save Parker.

I must say, I absolutely ADORED Parker. For some reason, I just love it when characters who are sexy don’t realize that they turn heads at every corner. Parker is just that type of character. Once an overweight kid, he’s lost weight but still has low self-esteem that makes him think people are staring at him for all the wrong reasons. His obliviousness when it came to someone finding him attractive was just so cute and slightly funny. I also loved that his sleep apnea made him very self-conscious. One of my favorite lines in the book is when Ivan finally realizes what Parker is hiding and says, “Come on. Let’s get some sleep, Darth.” I cracked up so much but also had a little ‘awwww’ moment.

At first, I wasn’t sure about Ivan but as the story progressed, I felt sorrier and sorrier for him. He’s been put into a situation that really sucks. He’s attracted to him roommate/suspect but he’s also trying to deal with his first killing. At the same time, I loved that Ivan and Parker connected so well from the beginning and really liked the unexpected jealousy they both had. The two together are hot but also sweet in that they want the same things, even if they won’t come out and admit they want the same things. There’s a big issue of miscommunication but, honestly, considering that Ivan is an undercover cop, it’s not as if he could have come right out and addressed what he wanted without blowing his cover completely.

My only little niggles with this is that it was easy to figure out who the villain was very early on so it made the story just a bit predictable, although I still enjoyed watching Ivan finally catch up to who was at the center of it all. Granted, the predictability on that was offset but the little twist towards the end. Beyond that, I wished we had seen a little more of Ivan and Parker after they reconciled. I feel like there wasn’t enough of them working out the issue.

In the end, this was still a great book. I enjoyed it and really got into the story. I felt bad for Parker and his loneliness and wanted to give Ivan a hug for all that he was being put through. It had a good pace where I felt like the characters actually became ‘friends’ before any intimacy happened between them. I’m looking forward to reading the next book in this series but hope there may be more to come of Parker and Ivan in the future!

One thought on “KC Burn Week Review: Cover Up”