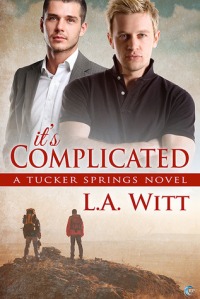 Blurb: After their umpteenth breakup, Brad Sweeney and Jeff Hayden are living apart and starting over from scratch. The morning after a promising first date, they’re more optimistic than ever that they can make it work this time . . . until Jeff’s ex-wife and business partner calls to announce she’s pregnant with Jeff’s baby. Brad’s already competing with a demanding business for Jeff’s time. Now there’s a baby on the way, and worse, he’s afraid Jeff is still carrying a torch for the woman who’s carrying his child.

Jeff is desperately trying to keep his life together, but before he can even get his head around the news that he’s going to be a father, his ex announces that she wants to leave Tucker Springs. Now he either has to take over her role at the shop while ferrying the baby back and forth from Denver, or move the business—and himself—with her.

Brad and Jeff knew reconciliation wouldn’t be easy, but they’re rapidly running out of room for compromise. And sooner or later, something has to give.

I’m a big sucker for the Tucker Springs books and I just can’t help myself every time there’s a new one.  I don’t even see what they are about; I just dive right in.  For It’s Complicated, I did have the opportunity at GRL 2013 to hear L.A. Witt read a big revealing scene from early on in the story, and if you’ve read the blurb already, you can probably guess what scene that might be!  So I knew a little about what I was getting in to.  I will admit, established couples or reunion stories are not usually my go to reads when it comes to romance, as I prefer them to be stacked with sexual tension, but since I had already met Brad and Jeff in the previous book, After the Fall, I really wanted to see them get their HEA.  And even though these guys appear in another book, I do believe this could be read as a standalone.

In the end, I did enjoy Brad and Jeff’s story, I just wanted a bit more story.

Overall Impression: I Liked It!