Book Review: The Guy From Glamour by Skylar M. Cates 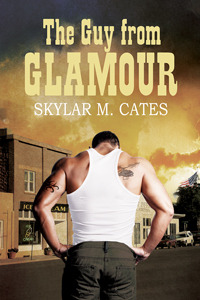 Blurb: Anthony Carrino loves his big, gregarious Italian-American family, even if his sisters are interfering, and his dad, the local sheriff, knows everything going on in town. He’s happy as a middle school guidance counselor. Despite helping kids and their parents fix their problems, Anthony can’t manage to get his own love life right. If only everyone would stop calling him the “nice” guy.

Dean Pierce doesn’t do relationships. A tough-minded military man, he is dedicated to his job as a Night Stalker, flying Chinook helicopters and not speaking much to anybody. He certainly doesn’t want to deal with a mess of emotions. But when tragedy strikes, Dean finds his hands full with his troubled niece, her irresistible guidance counselor, and a meddlesome family, which includes a rather large puppy.

This was a really pleasant surprise. I was thinking it would be one way, and it turned out to be totally different, but I loved it just as much.

I fell in love with Dean. He’s this rough and tough Special Forces guy, who’s been in the military since he signed up at 18. So, basically, his whole adult life has been combat and high adrenaline missions. It’s the only thing he knows. He is good at what he does and gets along well in that environment. What he doesn’t do well with are relationships, be them romantic or otherwise. He just plain isn’t good around people, namely civilians. Unfortunately, he is forced to adapt when he’s called upon to take care of his teenage niece. But, adapt he does, and it was a joy to watch his transformation. He had a little bit of help though.

At first, Anthony comes across as a bit of a doormat, having been cheated on and dumped by his last boyfriend and not having much luck with relationships before that. He’s a guidance counselor at a high school, who is now living with his parents. But, Anthony surprised me. He ends up being the perfect person to pull Dean out of his shell, and together they were hot stuff. They start their relationship with a no strings, friends with benefits, agreement, since neither of them see much of a future but neither wants to ignore their attraction. What ensues is an actual slow burn relationship that grows over the weeks of their spending time together. I especially loved how Dean had to learn to slow down. His entire sexual experience had been secret quickies and mostly nameless hookups. After he acknowledges he has no “finesse,” Anthony shows him how things should be.

Anthony is also trying to help Dean cope with his relationship with his niece, which is more foreign to him than regular civilian encounters. Besides being the typical teenage girl, she has issues from bullying and the loss of her mother. But their friendship grows as well as they learn to trust each other and become a family. They all have adjustments to make, but none more than Dean, as he figures out how to deal with the abrupt changes his life has taken.

This was well written and had a nice flow. I was afraid I would get a little bored here and there, but I was so invested in the characters, it was over before I knew it, and long before I was ready to say goodbye to them. This was my first book by Ms. Cates, and it definitely won’t be my last. I’m especially looking forward to the next book in this series.

One thought on “Book Review: The Guy From Glamour by Skylar M. Cates”