Posted on May 4, 2014 by thebloggergirls

Heather C:  We are just a few days away from the release of Joanna Chambers new book Enlightened…the highly anticipated conclusion of her Enlightenment Trilogy.  Joanna is here at TBG today for her first stop on the Enlightened Blog Tour and talking about how her stories are a different sort of Scottish Romance.  Be sure to get your entries into the Rafflecopter giveaway for a chance to win ebook copies of all three books in the Enlightenment series and a $10 All Romance eBooks gift card.

When I tell people that my Enlightenment trilogy is based in Regency Scotland, it tends to conjure up a whole pile of assumptions. Scottish historical romances are so commonplace (in het romance anyway) that they’ve practically become a sub-genre all of their own.

The covers usually feature a burly guy with long hair, a bare chest, a kilt and a massive sword looking all brooding and fighty. He’ll say things like “Doona fash yersel’ woman!” and dislike English people, or “sassenachs”, as he’ll call them. He’ll prefer to spend his time roaming the purple hills and green glens inhabited by his clan, but will occasionally be forced to put on satin and lace and dance with “simpering English misses” in ballrooms in London whose tightly fastened gowns he’ll tear apart with his bare hands on the way back to Gretna Green.

I’m afraid my Scottish-set books bear no resemblance to this whatsoever. I have a rather different view of Scotland, and specifically, my Scottish characters.

David Lauriston, through whose point of view all three books are written, is a lowlander who would never consider wearing tartan. What’s more, he’s a post-Enlightenment Scot with roots that are modest but not poverty-stricken. He is educated and about as socially mobile as someone might be in the 1820s, a man on the way up. He is far more concerned about universal human questions – the inequality between rich and poor, men and women – than in any parochial argument between nations. He may be a Scot, but he sees himself primarily as a citizen of a new, modern world.

Lord Murdo Balfour is something else entirely. Murdo comes from old money, old power. A Scottish aristocrat’s son, he is intimate with the corridors of power of Great Britain. Cynical, self-serving, hell-bent of wringing every bit of pleasure he can out of life, Murdo knows as well as David does that the world is changing. He sees that the power of aristocrats like himself is waning and that a new class – a merchant class – will be the power of the future. That money and markets will replace land as the currency of power.

Like David, Murdo sees himself in far more universal terms than those bare-chested, claymore-wielding heroes from “Scottish romance” books. David and Murdo are Scottish, but that’s very far from being everything that they are. They are men of a new, changing nation, part of a union—Great Britain—that is on the cusp of becoming the greatest empire in the nineteenth century world. They are part, too, of a post-Enlightenment society that will, over the next hundred years, transform, as the suffrage is gradually extended and women’s rights are slowly recognised.

It was important to me, in these books, to try to write about Scotland and Scottish characters in a way that strips away the tartan and claymores and shows that underneath the layers of nationality and culture and class and all that stuff, people are pretty much the same all over.

But I’ll let readers be the judge of whether I’ve managed to do that. 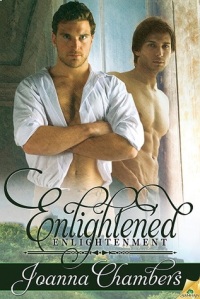 Five months ago, David Lauriston was badly hurt helping his friend Elizabeth escape her violent husband. Since then, David has been living with his lover, Lord Murdo Balfour, while he recuperates.

Despite the pain of his injuries, David’s time with Murdo has been the happiest of his life. The only things that trouble him are Murdo’s occasional bouts of preoccupation, and the fact that one day soon, David will have to return to his legal practice in Edinburgh.

That day comes too soon when David’s friend and mentor takes to his deathbed, and David finds himself agreeing to take on a private mission in London. Murdo is at his side in the journey, but a shocking revelation by Murdo’s ruthless father leaves David questioning everything they’ve shared.

Joanna Chambers studied law, became a litigator, married and had two sons before she began writing. She knew she wanted to write since she was eight years old but never seemed to get beyond buying notebooks and sharpening pencils. Fortunately, after about twenty-five years of sharpening pencils, Joanna found her muse when she rediscovered her love of the romance genre.

Joanna lives in Scotland with her family. When not working, cooking, cleaning, packing schoolbags or writing, she can be found with her nose buried in an ebook.

For a chance to win all 3 ebooks of the Enlightenment series and a $10 All Romance e-Books Giftcard, enter by clicking the Rafflecopter ling below: