Book Review: The Skinny on Love by Fyn Alexander 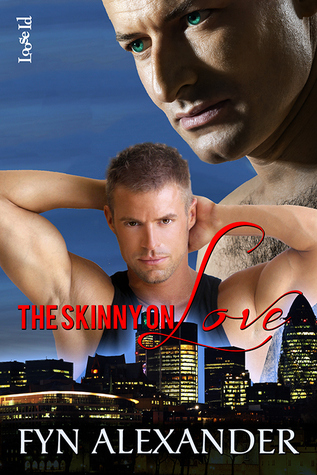 Blurb: Thirty seven year old fitness fanatic and gym owner John Moorcroft has always known he was gay, and he has always had a problem admitting it, even to himself. After a failed attempt at a relationship with Roslyn, his long time female BFF, he knows he must take a hard look at himself. The first thing John does is to try to find out what happened to his mother who disappeared when he was four years old. Roslyn recommends Sky Cook Investigations to help him. The first time John meets Sky he finds himself extremely attracted to the man’s bear-like physique and eager to please manner.

Sky Cook, thirty six years old, is sweet, mild mannered and desperately in need of a health regime. He knows he needs to lose weight but is thwarted by issues from his childhood. Sky also wants a loving, yet dominant man to direct him, so when John suggests they barter services, the perfect storm for a relationship unfolds.

I’m a bit torn about this story. There were certain aspects I enjoyed and others I couldn’t stand, almost to the point of not wanting to keep reading. Most of that negativity surrounded the one MC, John. He is pretty awful most of the time, so I will start with him.

John is in the closet and in major denial. The story opens up with him attempting to have sex with his long-time friend, Roslyn. She tries to get John to admit he is gay, but John’s is steadfast in his denial of anything gay. There are reasons which somewhat explain this, but, unfortunately, it’s only one of John’s issues.

John meets Sky after Roslyn recommends his investigative services to help John find some closure with his mom who left him when he was a child. Sky is really sweet, but has a few issues of his own, mainly overeating. He is in a bit of denial himself where this is concerned. They end up agreeing to barter Sky’s services for John’s as a personal trainer to get Sky into better shape. This is all well and good, but John is completely horrible to Sky on more than one occasion. Meanwhile, even though they have sex a few times, John remains adamant about his being straight. Sky then keeps the mindset that he will just take what he can get and be happy about it.

Their “relationship” takes on more that of a dom/sub which seemed to work well for the most part, as Sky truly enjoys being submissive and having someone provide structure for him. John remains fairly cold and unfeeling but does make an effort to be the dom Sky needs. It isn’t until closer to the end that John truly realizes how special Sky is, and by then, I was just happy to see things improve in that area.

I didn’t have any issues with the actual writing style or execution. I simply couldn’t seem to get behind these characters for the reasons stated above, and it really affected my overall enjoyment of this story.