Posted on May 7, 2014 by thebloggergirls

The Ramblings From a Mad Gay Man

First, thanks for letting me drop in and bend your ear a bit.

The start of college football season and the upcoming Olympics was all I needed for inspiration for My Hero. Seeing a guy on a Harley and a conversation with a friend of mine who is an elementary school teacher was all it took for Hawk ‘n’ Harley. So, you see, just about anything can set my mind to whirling about with a possible story line.

As for what drives me crazy? I admit, it is a very short drive. I’m already pretty nuts. I think what really goads me the most is when women write reviews saying that some of my sex scenes aren’t possible. My first response is “Lady, when you grow a dick, you let me know and I’ll give you instructions on how to use it!”

It sometimes amazes me how little people in general know about the lifestyle of gay men. The whole insta-love thing for instance. Hell, I’ve seen guys show up for a second date towing a U-Haul trailer! Yep, it does happen. I’ve seen it over and over again. Of course that doesn’t mean it ends up with a HEA, but it does occur. All the time.

Commas. Commas drive me insane. I never seem to get them right. Thank the powers that be for good editors. When I’m writing, the characters take over and they could care less about grammar. I’m constantly have to go back over what they’ve had me write and do corrections. It’s a total pain, but I’ve learned to deal with it. They have the control, which of course, drives me crazy.

Of course, I’ve gone into both of these subjects in depth on my blog. Go take a look and you’ll see the mad ramblings of a gay man on the edge.

About The V Unit 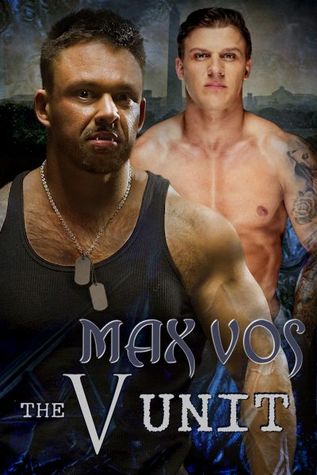 Only a select few in the human world knew of the existence of the V-Unit, a small group of highly trained Marines – who happened to be vampires.

And it would have stayed that way.

But when events in the vampire world, threatened the stability of the human world, the powers that be called for the unit’s specialized services.

An intrepid war correspondent, Bronson Rudan, who’d seen more than his fair share of fighting, stumbles across the unit by accident, and is drawn into their world.

Bronson has no problem with that, given that he gets to spend time with a hunky Marine Lieutenant, Sarge. Although he won’t remember any of this when they’re through.

At least, that was the plan…

Available at: Amazon & All Romance eBooks

Max Vos is a classically trained chef with over 30 years of food service experience. After retiring in 2011, Max found himself with time on his hands and was urged to turn his talents to writing. ‘Cooking English’, a short story, was his first published work, and since then Ravenous Romance have published five more of his short stories. His first novel, P.O.W. was released October, 2013 with MLR Press. His second novel, My Hero was a best seller and has just been recently been released in French.

You will find everything in a Max Vos story. From sweet and sexy, even raunchy, to powerful, raw and gritty—something for all tastes.

The prize in this blog tour is an ebook copy of The V Unit. Just click the link below to enter!

Please be aware that the only way to enter the giveaway is to click the Rafflecopter link above. Any comments on this post will not count towards entering the giveaway but are still be welcome anyway.

Don’t forget to check out JustJen’s review of The V Unit to see what she thought of it!

One thought on “Honorary Blogger Max Vos: The Ramblings From a Mad Gay Man + Giveaway”