Book Review: The Flesh Cartel #16: To the Victor by Heidi Belleau & Rachel Haimowitz 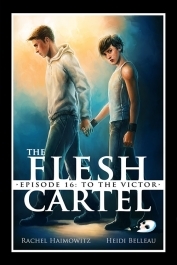 Blurb: In the exciting final season of the Flesh Cartel . . .

With the help of the FBI, Mat Carmichael has let himself be re-taken by the Flesh Cartel. Objective? Rescue his brother, exact revenge, and destroy the entire organization from the inside.

FBI Special Agent Nate Johnson will be playing backup, of course, but to get Dougie out alive, Mat will need to make sure his brother is out of Allen’s clutches before calling in the troops. Now that Mat’s back in bondage, though, there’s no way he can do it alone. He’ll have to ask for help from the only man within the Cartel who cares about Dougie’s welfare: Nikolai. And even knowing it will destroy him, Nikolai delivers.

Bringing down the Cartel should have been the hardest part, but it doesn’t take long to realize that the real challenge has only just begun. Dougie doesn’t know how to be free anymore, and Mat is forced to admit that he may no longer be strong enough to help himself, let alone his brother. But with loved ones in their corner and their love for each other banked but not extinguished, Mat and Dougie learn that you can come home again, no matter how desperate the circumstances you’ve left behind..

Things are really moving along now that the plans of retrieving Dougie are finally put into motion. The players are all trying to get into the right headspace for the sting. Some are having more trouble than others though, and Nate actually has to step in and take a more active role in the operation.

Mat is, as ever, focused on Dougie and getting him back no matter what he must endure in the process. He is trusting Nate more and recognizes he has feelings but doesn’t quite see any possibility of a future after certain events have taken place. He seems remarkably realistic mentally about what has gone on and what his issues are, even recognizing how much therapy might help him when all is said and done. There is a touching scene with Roger where Mat tries to convey to him that life without Nikolai will be good and what he deserves. Poor Roger has been under Nikolai’s thumb for so long that he can’t envision life without him and is terrified of the prospect altogether.

Dougie, poor Dougie. He is still hanging in there through the days and days of torture Allen puts him through in trying to get the details behind Mat’s escape. He tries so hard to be strong. Finally, in this episode, we see him thinking a bit more rationally where Mat is concerned. Dare I say he is actually seeing him in a different light and maybe believing Mat really does love and would do anything for him.

Again, I was on the edge of my seat for a lot of this. Allen continues to be a difficult bastard not making things easy in any sense. Just when it seems the end is in sight, the story ends, and we are left with our mouths hanging open waiting for more. I’m completely invested in this series, and while I couldn’t keep myself from reading each one as soon as they hit the shelves, I’m excited for those who will be able to read it all in one go. This was yet another solid installment of this gripping story.