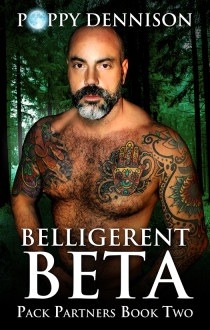 Blurb: When a human is chosen to lead the pack instead of him, Beta Dan Keller struggles to find his footing in a rapidly changing environment. Committed to his pack and not one to turn away from a challenge, Dan follows his Alpha’s request and works with Nathan Ross, the new pack Omega. Though he is initially concerned that Nathan’s weakness will harm the pack, Dan learns there is more to the shy wolf than meets the eye.

When Dan gets a call from Nathan, the omega of the pack, who’s freaked out and doesn’t know what to do, Dan expects the worst and immediately jumps to Nathan’s aid, surprised that the timid omega is asking for his help. Thankfully, it’s not as dire a situation as he was expecting but what he realizes is that Nathan is much more broken than anyone ever believed. With the urge to not only heal Nathan but to protect him, Dan makes it his mission to give the little omega some TLC. Unfortunately, things are a little more difficult than that when a new threat comes to town that’s looking to hit them where they’re most vulnerable… with Nathan. Can Dan give Nathan what he needs and save him from his past or will trying to save Nathan prove to be a useless attempt?

This book just about broke my heart! I loved the way that it showed how Dan was a little miffed about not being picked as alpha but that we also got to experience why he was never selected as alpha and his understanding that he was never ready for that. I also loved seeing the change in Dan from the aloof beta to a more caring and reliable beta. Nathan was such a damaged character and he really made my heart clench with why he was so damaged but it was adorable the way he wormed his way into Dan’s heart. The relationship between them starts off tense, especially when you consider how Nathan was in Accidental Alpha and Dan’s opinion of him but then it slowly turns into one where they’re not only comfortable with one another but they crave to be around each other and reach for the other when the situation calls for it. I just adored them together.

My only little niggle with this one was that it was too short! I really wished it had been longer because I’d love to have seen more of Nathan and Dan actually together as mates and to experience more of that connection that they were developing. Beyond that, I would have loved to see more of Nathan learning and exploring what it means to be a wolf and how Dan helps him with that.

All in all, this was a fabulous addition to the Pack Partners series. I can’t wait to read more in this series but I definitely don’t want it to end! I’m loving the world and the characters but Dan and Nathan might just be my favorite so far. If you liked Accidental Alpha, then you’ll definitely enjoy this one. If you haven’t read it yet, then what are you waiting for?! Pick it up and read it!!