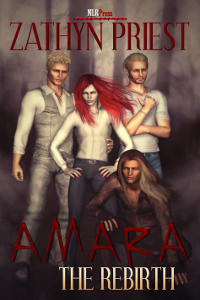 Blurb:Legendary vampire, Emrys Amara, changes Matthew’s destiny when he’s thrown into a world of kidnap victims, werewolves, deceit, and the rebirth of the greatest vampire clan in history.

Matthew and his husband Dean are slayers, trying to end a chokehold Amara half-breed vampires put on Nottingham and kill the leader, Amdis. A diary supposedly written by legendary Emrys Amara is sent to them, yet they doubt the orphaned vampire could have survived the demise of his clan. Meeting Emrys proves them wrong. Matthew falls deeply; Dean’s jealousy takes a sinister turn.

A chain of events involving kidnapped children and werewolves follows as Amdis teams up with another vampire clan. Can Matthew and Emrys save the children while rebuilding the Amaras as the greatest vampire clan in history?

Review:  Why I’m always amazed at the superior storytelling by Zathyn Priest, I do not know. Some of my all-time favorite books are by this author, but, yet again, I find that his ability to breathe life into his characters, and make me really care about them, takes me by pleasant surprise. This book was no different. The prologue alone made me fall in love with Emrys Amara (nee Aled Tudor) but also broke my heart. His story is a difficult one, and his sadness lasts way too long. He does eventually get his HEA, but he suffered tremendously to get there.

Emrys Amara was born in Wales as Aled Tudor in the 1700s. He was kidnapped by vampires as a child, used and abused for two years by the Massimo Clan before being rescued by the Amara Clan and mated with the Master Amara. The Amara vampire clan is pure and non-violent and only those exhibiting those qualities are turned. Emrys was turned at age 16 and will, for eternity, appear as a red-headed boy while in his human form.

When we meet Matthew and his husband Dean, you are instantly drawn into a relationship that has gone sour. Not only has it gone sour, but it’s at the rancid point, and Dean is just an awful, awful man. He has zero redeeming qualities, and I was rooting for Matthew to kick his lying, cheating, and gold digging butt to the curb. Some might have an issue with the cheating aspects, but I did not. Matthew gives the marriage his all until he learns the truth about Dean, and that truth made the marriage null and void in my mind.

What makes Emrys: The Rebirth such a great story is the fact that it’s a whole story, the complete package. You become completely invested in the characters and want them to win this battle that’s raging on. You have full and complete characterization; you “know” these people inside and out…the good ones and the bad ones. And the story isn’t predictable. That, in and of itself, grabs me and won’t allow me to stop reading until I’ve finished the whole book.

There are some surprises and twists. Some that made complete sense and others that threw me because I just didn’t see them coming..at all. So do yourself a favor and read this book. If you love a good paranormal romance that’s more brilliant storytelling and world building and less sex, then this is the book for you. You don’t even realize that there is very little sex in the story because the prevailing theme is more paranormal romance and less erotica. That just works for me, and I am sure Zathyn Priest’s fans will love to add this little gem to their collection.

Overall Impression:  I loved it!

2 thoughts on “Book Review: Amara: The Rebirth by Zathyn Priest”