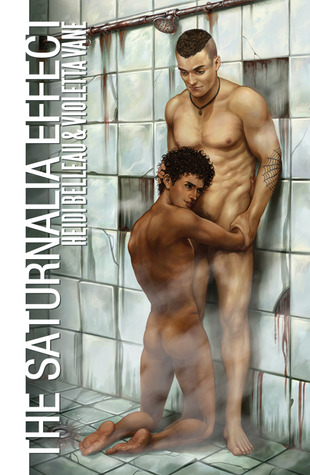 Blurb: Troy Khoury is serving a life sentence in Westgate prison for a robbery gone wrong. He just wants to keep his head down and do his time, but he runs afoul of an old-timer named Franchetti. Franchetti offers Troy a simple choice: kill fellow inmate Daniel Amato by Christmas in exchange for protection, or be tortured and raped to death by Franchetti’s heavy, Pliers. Troy’s no killer, though, and Daniel is as gentle and calm as can be. But a prison is a small place, and time is running out. Troy must decide how much he’s willing to sacrifice before the choice is taken from him.

Reader’s Note: Buy “The Saturnalia Effect” at Storm Moon Press and receive a bonus deleted scene not available through any other retailer!

Review:  This was an interesting little story.  Poor Troy is a sweet guy who basically took the fall for his dead twin’s botched robbery.  Unfortunately, he got in with the wrong prison crowd and is being forced to kill inmate Daniel in exchange for his own life.  He takes quite the beating or two, including some torture for his failing to do so, as he and Daniel fall for each other.  There are a few graphic scenes, and I’m not really sure how realistic prison-wise they were, but I found they really set the tone for how difficult things were for Troy.

This was a quick read, which I read in one sitting.  The writing flowed, and it gives just enough details about what happened previously to land Troy in the tight spot he’s now in.  I admit I was feeling a little down about the bleak future these guys faced, with basically no chance of ever seeing life outside bars, but there is a little twist at the end that changes all that.

I wasn’t too sure how I felt about the supernatural twist, but it worked well with getting these guys to their freedom and supposed HEA, assuming they were able to make it across the border.  If you’re looking for a quick, somewhat edgy and a bit dark, yet heartbreaking and romantic at times, love story, this is a nice option.