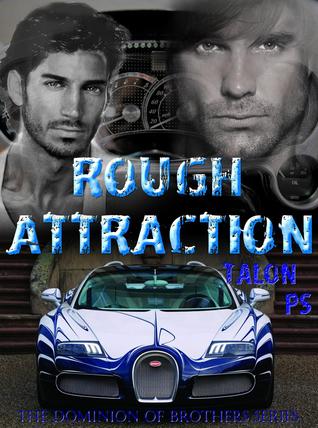 Blurb: Like brimstone and caramel. When two men come together with a Rough Attraction that burns as fast as Nitrous Oxide in their veins, its hard to find the cruise control and trust that they can make this last for the long run.

Life and relationships aren’t always neat and clean, or come in perfect little packages. Maxum St. Laurents knows this all too well. After being in a four-year relationship that does everything but bring him pleasure and fulfillment, he finds himself struggling to keep working at it. It doesn’t help matters that the man who satisfies every need and want he could have is the man he is having an affair with. And for Maxum, affairs don’t translate into long term relationships.

Darko Laszkovi just couldn’t help himself when he spotted the handsome man ranting over a flat tire on the side of the road. Moreover, he couldn’t be happier when the reward turned into an insatiable lover he hoped to keep for the long run. But, despite the rough attraction that holds them to each other like power-magnets, when Maxum struggles to let go of a relationship that doesn’t work; Darko’s patience and understanding that, we aren’t always where we want to be, gets tested to the max.

Review:  While this book is part of the Dominion of Brothers series, I think it could easily be read as a stand alone.  Some of the guys from the previous books make appearances, especially Pyotr and Cliff from the last one, as Darko is one of Pyotr’s brothers.

This starts out hot and heavy with some very sexy scenes.  Maxum and Darko are total opposites.  Darko is the sexy motorcycle riding mechanic, and Maxum, the impeccably dressed businessman.  Darko brings a spark of life to Maxum that he didn’t really even know was missing.  Unfortunately, he is still in a “relationship” with Simon.  Even though he realizes that his and Simon’s relationship is missing just about everything, Maxum tries to make it work.

Simon is just awful.  He is portrayed as a super shallow, hoity toity, stuck up snob, who is only ever more concerned with Maxum’s checkbook.  He is the social butterfly who stands by Maxum’s side through all of the charity and other events he must attend given his status, etc.  But that’s about all he does for Maxum.

Darko is one of the most laid back and patient guys when it comes to Maxum.  He is content to take what he can get in the beginning, up until he realizes how good they are for each other.  Then, he steps up and tries to fight to show Maxum the same thing and that he would be much better with him instead of Simon.

This was my least favorite of this series so for, though I’m not really sure I can pinpoint why exactly.  I think the dynamic threw me here.  Darko seems so outclassed from Maxum on the outset, but when it really came down to it, no question, Darko deserved so much better than Maxum, at least until Maxum woke up and realized how good he had it with Darko and how fulfilling their relationship is, as opposed to what he is used to.

It was nice seeing Pyotr’s family again, although this story seems to take place prior to Cliff’s book, as Kimmi is still a part of the family.  That timing aspect kind of threw me as well, since I was expecting this to be taking place after or during the same time as Cliff’s story.  It made me think I missed a few things in that book.

All in all, I enjoyed it, loved the hot scenes and other aspects of the story, but I’m looking forward to seeing more of the Dominion again.  Trofim’s book is up next, and as he has been an interesting little addition, I’m excited for that as well.