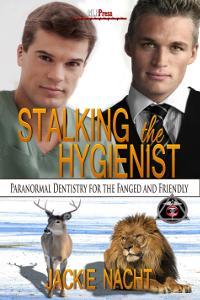 Blurb: This lion shifter will go to any length to get his deer shifting hygienist, including going to the dentist. Bring on the nitrous oxide!

Beauregard made a mistake… a horrible mistake. Now embarrassed, he focuses on what he loves most, working as a hygienist at Paranormal Dentistry for the Fanged and Friendly.

As soon as Sergei saw Beauregard coming up to his meat counter, he fell hard for the deer shifter. The only problem is Beauregard is running from him. Being the lion shifter he is, Sergei decides to take matters into his own hand and goes hunting. However, Sergei never imagined he would have to face his worst fear and choke down a salad.What’s it going to take to make Beauregard his?

This was an adorably cute story about a lion shifter trying to woo a deer shifter. Unfortunately, the deer shifter, Beauregard, is still trying to recover from an embarrassing rejection from a guy he really liked. Not wanting to make the same mistake again, he doesn’t trust his judgment when it comes to men so when Sergei shows interest, Beauregard immediately shuts him down. But Sergei won’t give up until he has the deer shifter as his own and will do anything to win Beauregard over even if it means going behind his back and getting help from Beauregard’s friend. Can Sergei finally get Beauregard to see that his mate is right in front of his eyes or will Sergei have to resort to some disturbing situations to get Beauregard to notice him?

OMG, this book was funny. I loved that Sergei was so determined to get Beauregard to realize that Sergei was the real thing. Sergei’s attempts at getting Beauregard to take him seriously and to finally take a chance on him were hilarious especially the scene where Sergei had to eat a salad! Poor guy loves his meat and hates his vegetables but to win Beauregard over he’s totally willing to eat like a vegetarian if he has to! I felt bad for Beauregard because his feelings for men are all mixed up and he can’t seem to tell when he’s got a connection with a guy or not. He’s sad, lonely and definitely depressed but I loved that he found what he was looking for in Sergei… even if it took him forever to realize it. One of the things I loved about this one, though, is that Beauregard and Sergei played in their shifter form. I absolutely adore it when I read a story with shifters and they’re playing in their animal forms.

My biggest issue with this one, though, is that it was too short and didn’t have enough depth to the story. I loved the characters and I loved the world but I still feel like everything was very two dimensional. I don’t really know enough about either Sergei or Beauregard to get a feel for them or to be emotionally invested in them, which really hindered my enjoyment of the story.

In the end, this is a very cute read with a few humorous moments. The characters are adorable and I did love that there were a few elements in this one that weren’t in the previous book. I desperately wish it had been longer and had more character depth but as it was, I still enjoyed the story. I’ll be looking forward to the next book in the series and seriously hope we’ll get one for Beauregard’s brother sometime soon! If you enjoyed the previous book, Peanut Butter and Jelly For Two, then you’ll definitely enjoy this one.