I was a bit alarmed when I realized I was supposed to do a picture post for this blog tour, because in truth, I didn’t start out with many pictures at all. But once I started looking… well, who can complain about an excuse to browse Tumblr, right?

First and foremost, I had exactly ONE inspirational picture for this book that I found way back at the beginning, and it was vitally important to me. For months, it was the wallpaper on my laptop. But it wasn’t of any of the characters. It was of the city. This picture helped inspire the tone of both  (which readers will see in the second book).

Miguel Donato wasn’t too hard to find. I found lots of pictures that could work, but this one was my favorite.

The site I found it on said it was David Gandy, but… does that look like Gandy to you?

Finding pictures of Ayo was problematic because even though Ayo is technically an adult, he’s been genetically engineered and manipulated to look far younger than he is. I didn’t want to go looking for pictures of fourteen year old boys because… eww. But, I think this picture captures a lot of Ayo’s vulnerability and his innocence. (And the hair is just about right, too!)  The second picture is more what Ayo will look like later in life.

Inspiration for Ayo #2 (later in life)

Of course, that leaves my main character, Misha.  Initially, I had no pictures at all of Misha, but when I started this post and started really LOOKING, I found a few really good ones. I think the third one  is by far my favorite, even though his hair is wrong. Something about his eyes just really feels right.

Inspiration for Misha #3 (my favorite) 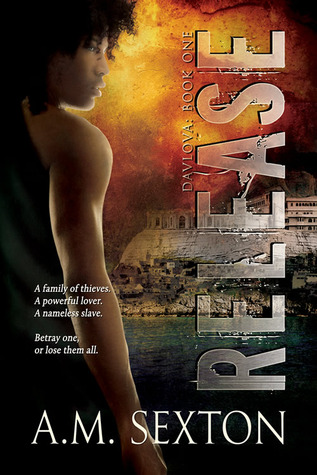 Davlova: a poverty-ridden city-state ruled by a tyrannical upper class. Resources are scarce and technology is illegal. But in the slums, revolution is brewing.

Misha is a common pickpocket until his boss gives him a new job. Disguised as a whore, Misha is sent to work for one of the most powerful men in the city. But his real task is far more dangerous: get close to Miguel Donato, and find something – anything – that will help topple Davlova’s corrupt government.

Misha is plunged into the decadent world of the upper class, where slaves are common and even the most perverse pleasure can be found. Although he’s sure Davlova’s elite is involved in something horrific, proof is hard to come by, and Misha begins to fall in love with the man he’s supposed to betray. Then Misha meets Ayo – a sex slave forced by the neural implant in his brain to take pleasure from pain – and everything changes. As the lower class pushes toward a bloody revolution, Misha will find himself caught between his surprising feelings for Donato, his obligations to his clan, and his determination to save Ayo.

Warning: This book contains graphic descriptions of violent sexual acts of questionable consent that may be disturbing to some readers.

A.M. Sexton (who also writes gay romance as Marie Sexton) is a typical soccer mom. She has a fondness for wine and cheese, an addiction to coffee, and occasionally bleeds orange and blue. She lives in Colorado with her husband, their daughter, her dog, and one very stupid cat.

The prize in this blog tour giveaway is a $50 gift certificate to an online book retailer of winner’s choice!

Don’t forget to check out JustJen’s review of Release to see what she thought of it!