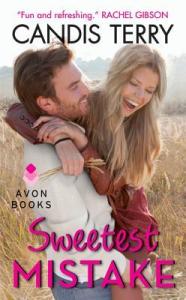 When friends become lovers . . .
Firefighter and former Marine Jackson Wilder has tough guy down to an art, but he’s learned the hard way that promises were made to be broken. Abigail Morgan was once his best friend, his first kiss, his first love, his first everything. He’d just forgotten to mention all that to her and she blew out of his life. Five years later, she’s back and he’s battling a load of mistrust for her disappearing act. But for some reason he just can’t keep his lips—or his hands—to himself.

It can lead to disaster or . . .
When her stint as a trophy wife abruptly ends, Abby returns home to Sweet, Texas, and comes face-to-face with Jackson—her biggest and sexiest mistake. Time and distance did nothing to squash her love for the act-first-think-later stubborn hunk of a man, and when he suggests they renew their old just-friends vow, Abby realizes she wants more. She’d cut and run once. Could she do it again? Or could she tempt him enough to break his promise?

Review:Jackson and Abigail were the best of friends; they were each other’s firsts (first kiss, first sex), before Jackson left for the Marines and Abigail left Sweet without saying goodbye. Now Abigail returns after her marriage crashed and burned. Jack still feels hurt because Abigail cut ties with him and the town – she wasn’t even there where he needed her the most – but he can’t deny that the attraction is still there. Jackson still cares for Abigail’s well being even if he is adamant not to go down that road of hurt again.

The Sweetest Mistake is only the second book from Candis Terry that I have read – and the second installment of her “Sweet, Texas” series. But already she climbs on my authors-to-watch list in the genre of contemporary small-town romance. I highly enjoyed the first book of this series and had been given clues in Anything but Sweet that Jackson and Abigail had history. I couldn’t help but immediately jump to read their own happy ending.

This book provides two themes that I love the most from my romance: second chances and friends-to-lovers. I came to really love the heroine in Sweet. Abby is strong – despite the ashes of her failed marriage, she is not turning herself into a pity party girl. Yes, the decision that she took seven years ago was a poor one, it drove her away from the person she loved the most … but Abby also owns up to her mistake and tries not to beg for second chances. Abby did apologize for not being there for Jackson when Jared and Joe died, saying it was because she didn’t know. I really love Abby, she is down-to-earth, compassionate, and she knows what she wants now, even if she is lost previously. For me, Abby is just an admirable heroine.

Jackson, on the other hand, managed to frustrate me several times. Honestly, I wanted to grab into the pages and knock his head for being such an idiot. But I love Abby too much to give the man she loves a brain concussion *lol*. But really … while Jackson might be swoon-worthy (especially because he is such a great Dad to his two-year-old Izzy), his fear over Abby leaving her again, his worry of opening up his heart and grabbing the chances to be happy, become a repetitive issue in here. Gah, you’re lucky that I still think you’re redeemable, Jackson Wilder!!

As with the first book, the supporting casts are great as always. This time, I’d like to give attention to Jackson’s ex-wife, Fiona. Fiona understands that she and Jackson are better off as friends. They got married only because she got pregnant. Even if she admits that Abby was there throughout her marriage to Jackson, Fiona stays friendly to Abby. She is not a horrible bitter bitch, and I’m so happy for that fact. It’s good to see a positive ex-wife in a romance story.

It is a satisfying sequel, most definitely. It’s heartwarming, light-hearted, sweet without being overly saccharine, and it is a very, very good romance. I am happy that there are more boys in the Wilder family, because I’m not ready to say goodbye to this town anytime soon. Bring me Jesse and Jake!