An Excerpt from Equals

“Thanks again for all of your help,” Russ said with a sigh. “I seriously can’t thank you enough.”

Stephen looked away from the TV and shook his head, glancing at Russ with a small smile. “It’s the least I could do. I feel responsible for what happened.”

Russ smiled back, Stephen’s earnestness relaxing him. “Let’s call it even then, I guess. Or we could be up all night with this.”

Stephen quirked an eyebrow up at him, eyes crinkling at the corners with amusement. Fuck, what a turn on. Why older men were such an attraction for him, he’d never be sure, but he’d realized it in college and had had a brief fling with a professor after the semester was over. It wasn’t the forbidden aspect of it—they’d both waited until after Russ was no longer his student—but he liked the age difference.

A man with a fit body, handsome face, graying hair, and a killer smile always got him going. Hell, his head and ankle still ached and he was starting to get hard. And was Stephen flirting? God, Russ hoped so. Couldn’t hurt to flirt back. “Well, being up all night isn’t always a bad thing.”

Stephen’s lips turned up at the corners in amusement. “You don’t think so?”

Russ shrugged. “It depends on the reason, doesn’t it?”

“Yes, I suppose it does,” Stephen murmured. He shifted to face Russ. “I’m afraid all of the best reasons are off the table.”

“Too bad.” Russ stared at Stephen’s lips and licked his own.

“Is it? Well, I suppose you did sleep all day, you’re probably not tired. Still, there’s work in the morning, and you’ll need rest to heal.”

Russ sighed, knowing Stephen was right, but wondering if the conversation had been dancing around the subject he’d been wondering about for a while now. He didn’t think he imagined the attraction between him and Stephen. Now the question was if they were going to do something about it or ignore it. 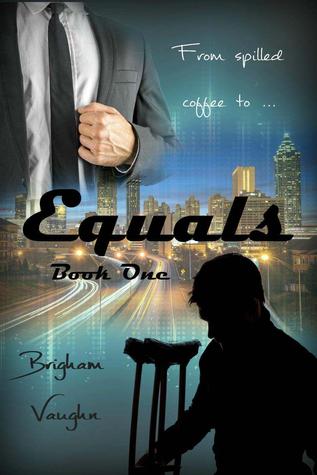 Too busy to date while he worked to put himself through school, Russell Bishop’s dedication finally pays off; he has a great job with Vantage Marketing. Stephen Parker, CFO of the marketing firm, has resigned himself to a life without a partner. For six months, they wanted each other but it isn’t until Russ slips on spilled coffee, and Stephen rushes to his rescue that they discover their attraction is mutual. However, the twenty year age gap between them proves difficult when they begin dating. Fiercely independent, Russ isn’t sure he’s ready for long-term commitment. Scarred from a previous relationship, Stephen is afraid history is repeating itself. Is there any way for them to meet in the middle and become equals?

Available at: Amazon & All Romance eBook

Brigham Vaughn has always been a voracious reader with her own stories to tell. After many years of abandoned plots, something finally clicked. Now she’s eating, sleeping, and breathing writing and is excited to have finally figured out what she wants to be when she grows up. In the little time that isn’t spent writing or reading, she loves cooking, yoga, photography, and remodeling her ninety-year-old home. Brigham lives in Michigan with her four cats and an amazing husband who has always been her biggest champion.

In this blog tour giveaway, you’ll have TWO chances to win! One commenter at each stop in this tour will win their choice of a backlist title from Brigham Vaughn. Each stop’s winner will be decided by that blog. This part of the giveaway starts now and ends on Friday, July 25, 2014 at 11:59 p.m.

In addition one commenter in all of the tour stops will win a $10 Giftcard from Amazon. Grand Prize giveaway ends July 30, 2014 at 11:59pm. Winner will be drawn by random drawing among all entrants on July 31st.  Must be 18 or older to enter. Void where prohibited.