Posted on August 11, 2014 by thebloggergirls 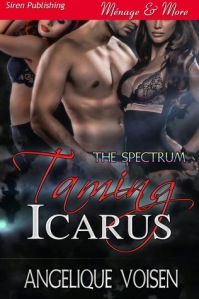 Blurb:  In the alternative world of New Furor, there are the rubes and the Spectrum Wielders, gifted men and women capable of wielding great magic with jewels. Chris Skinner, Icarus, unfortunately belongs to a Spectrum class born and bred for service. She also belongs to an abusive Spectrum Wielder who would do anything to avenge her dead sister, even if it destroys Chris and herself in the process.

Chris’s owner leaves a reckless trail of vengeance, triggering a confrontation with two of the city’s powerful enforcers. Gus Terrel and Iris Donovan are unlike any Spectrum Wielders Chris has ever met. They only have one interest, and it’s not taking Chris’s owner into custody. They want Chris badly, but Chris mistrusts their intentions. Why anyone would want second-hand property is beyond her.

Acquiring their third is harder than Gus and Iris ever imagined, but they would do whatever it takes to make Chris exclusively theirs…no matter the cost.

Love, love, love! If you like fantasy mixed with incredibly hot M/F/F action, this is a must read.

This book takes place in New Furor, a mystical place home to the magical Spectrum Wielders. Wielders are born of nobility and use jewels as power sources to weave intense magic. The highest class of Wielders, the Violets, are the most powerful and use the lower classes to aid them in their quest for more power. Chris Skinner, also known as Icarus, is of the rare Red class, a class that needs no jewels to wield magic. Being born into the Red class has condemned Chris to a life of servitude. At the beginning of the book, Chris is owned by a kind but firm Violet, Alexis Castiel; however, upon Alexis’s death, Chris is passed to Alexis’s cruel and abusive sister, Madeline. Madeline will do anything to avenger her sister’s death, even if it means placing herself and Chris in mortal danger through her reckless actions.

Madeline’s reckless actions ultimately lead to a potentially deadly showdown with two of New Furor’s most powerful enforcers, Gus Terrel and Iris Donovan. Even with Chris’s raw Red power, Madeline is no match for Gus and Iris. When she flees the battle, Chris is left in the custody of the couple that wants her so badly. Chris, emotionally beaten down by years of abuse, cannot fathom why such an incredible couple would ever want her as their third. However, as she learns to trust the couple, Chris soon finds the closeness and intimacy she longs for in the arms of Gus and Iris. This is where the book starts to get incredibly hot. The sex scenes between Chris, Gus and Iris are perfectly mixed between sensual and rough. Each encounter they have is better than the last, and the author is so descriptive, it almost felt as if I was there looking in on all three of them. After defeating Madeline in battle and forcing her out of the city, the couple finally wins Chris’s trust and convinces her to move in with them. In the end, the trio find their happy ever orgasm filled after.

My only complaint is the book ended too soon; I would have loved to continue to read about more of the trio’s adventures outside, and especially inside, of the bedroom. Additionally, a glossary of terms prior to the prologue would be helpful in better understanding the Wielders and rubes.

One thought on “Book Review: Taming Icarus by Angelique Voisen”