Book Review: The Beast Without by Christian Baines 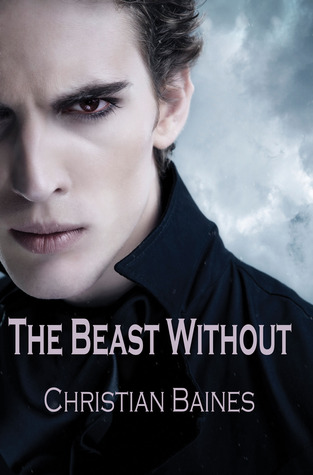 Blurb:  Reylan is everything a Sydney vampire aspires to be: wealthy, handsome and independent, carefully feeding off companions plucked from the gay bars of Oxford Street. When one of those companions is killed by Jorgas, a hot-headed young werewolf prowling his streets, Reylan reluctantly puts his cherished lifestyle of blood and boys on hold to help a mysterious alliance of supernatural beings track down the beast. It can’t be that hard … not when Jorgas keeps coming after him. But there’s more to this werewolf than a body count and a bad attitude. As their relationship grows deeper and more twisted, Reylan tastes Jorgas’ blood, reawakening desires the vampire had thought long dead. And what evolves between them may be far more dangerous than some rival predator in the dark…

Boy, do I love a gritty paranormal that is different than the norm. In this world, there are vampires and werewolves, though they prefer to be referred to as the less derogatory terms of Blood Shades and Flesh Masters. We quickly learn that everything we know from books, tv and movies is basically a bunch of b.s., especially where vampires, excuse me, Blood Shades are concerned.

Reylan is one such Blood Shade who basically goes about his business until one of his “companions” is attacked and killed by Jorgas the werewolf. Reylan decides he needs to take out Jorgas and is further lured into doing so when he is introduced to the leader of The Arcadia Trust, an organization working for the alliance of supernatural beings. All is not as it seems were the killer is concerned, as Reylan finds out when he catches up to Jorgas.

Reylan, up to this point, has basically been a non-sexual being. He lives to feed with little to no sexual pleasure involved. That is, until he is awakened when he feeds from Jorgas. These two share a sort of bond, but they really don’t embark on any type of relationship as you would expect. They work together to try and clear Jorgas’ name and find many more things are not what they seem. Secrets are being held by more than one person or being, and you never really know who the good guys are.

I found this to be a really interesting story. There is a lot going on with the Arcadia Trust that we really only get a glimpse of at this point. There is a lot more to the myths or background of the Blood Shades and Flesh Masters, but that is only touched upon as well. This ends on a HFN note, and while many questions are answered, there are still quite a number outstanding.

I really liked Reylan. He pretty much makes no excuses for himself, tells it like it is, and is generally a witty, mysteriously sexy being. I felt like we only just broke the surface where he is concerned, and I really wanted to know more about him. He and Jorgas seem to be in a very fragile give and take place with their relationship, and I am really excited to see there is more planned for them, as well as the rest of this world.

The story is very well paced, and reads very smoothly. While writing up this review, I noticed it has a pretty steep price tag which will undoubtedly deter a lot of readers. However, if you can get your hands on this one and are looking for something with more focus on the paranormal, as opposed to a romance, I highly recommend you give it a try.

One thought on “Book Review: The Beast Without by Christian Baines”