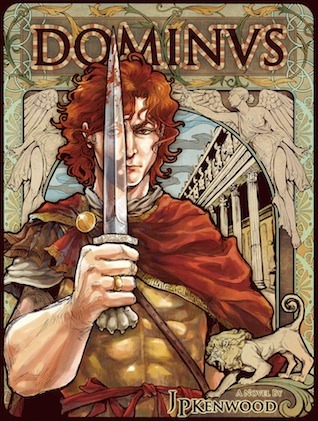 Review: This turned out to be quite a bit different than I was expecting. The setting is ancient Rome and centers around Gaius, aka Dominus, aka Commander. Part of the story is about him in relation to his position and station in life as a successful conquering military commander. But the majority centers around the various relationships in his life.

I have to say that the one that intrigued me the most was with his long-time friend and lover, Lucius. These guys were fabulous together and sexy as hell. Unfortunately, due to the danger involved in anyone finding out about their ongoing sexual relationship, which is heavily frowned upon (it is unacceptable for men to have sex with their peers), they reluctantly end that aspect of their friendship. I was very disappointed by other events involving Lucius but hope to learn more in the next installment.

There are also the relationships with Gaius’ wife, his ex-pleasure slave turned freedman, Maximus, who now oversees the current team of pleasure slaves, including Simon and Nicodemus, as well as the newly acquired Allerix, to name a few.  We learn the most about Maximus, but I was definitely interested in seeing and learning more about Simon and Nic as well.  They are all worried about their positions with the presence of the new Allerix and each long for more attention from their Dominus.  To be fair, Gaius seems to care about each of them, and while he does not hesitate to mete out punishment, he is fair about it.

I was never really sure through most of this who to focus on besides Gaius, as he is involved with so many people. I honestly don’t know how he keeps up physically. There is an extreme amount of sex involved in one form or another. These guys are certainly a randy bunch.  It seems as though when Gaius isn’t playing up his role to his peers and Emperor, he is having sex with someone.  Luckily, he always seems to have someone available and/or kneeling at his feet ready to take care of him.

This seems like it is going to be about Gaius and Allerix, and to a point, it is.  But even by the end, they have only just begun to be on the same page.  Allerix is still harboring such hate at Gaius for being a part of the army that massacred his family and people.  He is still struggling with understanding he is now a slave.  He is struggling a bit with his conflicted feelings that are starting to become apparent the more time he spends with Gaius.  I can definitely see these two being more intricate sparring partners, but again, we really only get a taste of it here.

This was well written in that I had no trouble picturing the setting at all at any time throughout.  It kept my attention and had me turning pages to figure out what was going to happen.  The language threw me off a little here and there, but once I got used to it, it became second nature.  And quite a bit of it is really humorous.  I chuckled out loud more than once.

A couple of things to mention – there are female slaves and wives, and while sex is had with them as well, none of it is very detailed.  This wasn’t nearly as brutal as I was expecting, or even had hoped for given the setting.  While there are a few whippings/canings, etc., again, none of it is very detailed as much as implied.  So don’t let that scare you off in other words.  In addition, I had not realized this was only the beginning of this story.  I was a bit thrown off by the ending, as it ends on a bit of a cliffhanger with much left unresolved, not the least of which pertains to Allerix.  I enjoyed many of these characters even if there are no real clear relationships with most, so I am eager to read the next book to see where things go.