Posted on September 4, 2014 by thebloggergirls 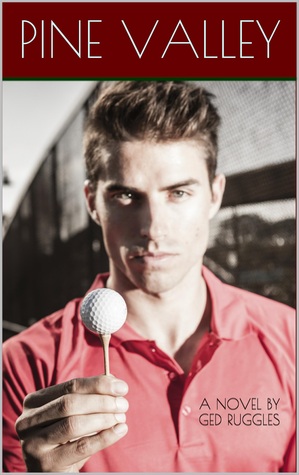 Blurb: Most men of ambition would kill for the chance to play a bracing game at Pine Valley, the most celebrated, and exclusive, golf course in the world. And in the summer of his 30th birthday, Jeff Carpenter gets his chance.

Trouble is, Jeff isn’t exactly a man of ambition, having put his literary dreams on hold 10 years ago for a soulless back office job. Nor did he ever master the art of the swing farther than once making par on the giant dinosaur hole at his local childhood mini golf.

But a chance encounter with the son of Pine Valley’s most senior councilman at a Philadelphia gay bar, sparks a clandestine romance that plunges Jeff into a web of intrigue that threatens Pine Valley’s very existence.

I found this quite a fascinating book, for a slim book there is a lot going on, most of it good.

Poor Jeff, about to get married to Amy, a local TV presenter but finally gives in and tells her that he’s gay, although they remain friends she tries to set him up with likely boyfriends, pretty much unsuccessfully. He meets Kent at a club, and they are instantly attracted to each other, and start a rather closeted romance. Kent had a girlfriend, and his father runs the most conservative and influential golf course around.

Jeff starts to get the feeling that he’s been followed, and meets Andrea, a woman in a mission to bring down the management of Pine Valley and make it a more open-minded place.

Places like Pine Valley exist all over the Western World, if you’re white, male and wealthy you fit in, if you’re Gay, Black, Jewish or female you can pretty much forget it. Kent had disliked the whole set up for ages, and when he finally comes out – the proverbial hits the fan.

Because there is quite a lot going on, some of the writing is a bit one dimensional, and I felt that the relationship between Jeff and Kent happened really quickly and wasn’t given enough time to develop. That being said the satire on the social scene of the golf club was well told, more enjoyable than the romance element, and the ending reminded me of a silent slapstick film.

For me, however, Andrea was the star of the show – a great character with oodles of potential.

One thought on “Book Review: Pine Valley by Ged Ruggles”