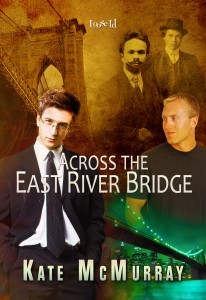 Blurb: When Finn’s boss sends him to a museum in Brooklyn, the last person he expects to see is his old rival, Troy. Although Finn and Troy have undeniable sexual chemistry, Finn still blames Troy for sending his career off the rails but Troy has research Finn needs. Troy also has an intriguing story; the museum he curates is haunted by the ghosts of two men who died under mysterious circumstances in 1878. Troy strikes a deal: he’ll help Finn if Finn helps him find out what happened to the men who died.

From diaries, police reports, and newspaper articles, Finn and Troy piece together the lives of the two dead men–and the romance that bloomed between them. As it becomes clear that the men were murdered, it also becomes clear that the ghosts are real and are capable of manipulating the dreams, thoughts, and actions of the living. When Finn and Troy start falling for each other, Finn worries that it’s all an illusion concocted by the ghosts to keep them working together to solve the mystery, but Troy is convinced the love between them is real. But how can he get rid of a couple of ghosts and prove it?

Twofer!  Get your Twofer here!  And funny enough, this book had a newsies kind of feel to it. Although based in contemporary New York City, the characters, settings and subject matter made me feel like I was drawn back into a time when men were gentlemanly and wore tweed.  Well, I’m not really sure what era tweed is from but you get the picture.  Anyways, back to my point. Across the East River Bridge is two beautiful and classic love stories all wrapped up in one well-written book.

First, we have the modern day story of Finn and Troy, enemies of old brought together once again when their day jobs intersect. Finn is both intensely angry and frothing with attraction towards Troy, who has matured since their ill-fated times together in college. Wanting to see where things could go between them, Troy strikes an agreement with Finn. He will help Finn professionally so long as Finn serves him personally. And no, you perverts, not like that… exactly. Troy’s museum is haunted and he wants to solve the mystery, which is where the second and more tragic love story comes in. Through their research and other more supernatural methods, they come to learn that the ghosts were men who were in a homosexual relationship in the early eighteen hundreds.

Woven within the main tale is also a lot of the ghosts’ story. I was so in love with Brill and Cutler (the ghosts! woooooo!) and I think Ms. McMurray was brilliant in the juxtaposition of her telling of their forbidden love along with Finn and Troy’s thankfully more accepted modern relationship. I never once felt like the transitions were awkward or unclear. I never got the sense that the author was getting side-tracked or too confusing.  The author’s methods were unique and worked very well for this book.

In addition, I really loved that Brill and Cutler’s story was a tragedy. Their relationship was beautiful and full of love and seeing it through the eyes of the past really made me thankful for how far society has come and really added an extra layer of intensity to their story.

The paranormal parts of the story weren’t anything out of the ordinary but again, it was perfect for this story. There was one unique aspect to the haunting but I will allow you to discover that for yourself!  So as we come closer to Halloween and spooky times, pick up Across the East River Bridge and spend some time with ghosts!  I swear you won’t end up sleeping with a night light on!