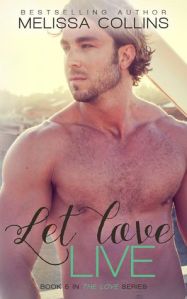 Blurb:  Who would you become if you lost the only person who ever mattered?

For twenty-six year old Dylan Hopkins, the answer is easy. He’s become no one. Memories of the happier times are all he has left as he finds himself meandering numbly through his now dull life. Though he cares about his work and family dearly, he’s yet to let himself find love again. Afraid of letting go of what he once had, Dylan chooses to keep his heart buried, where it belongs, having died a long time ago.

Conner Michelson is about to change everything Dylan knows. He’s every bit the bad boy persona – tatted up, ex-MMA fighter, but after an injury leaves him unable to fight, he has to rethink his goals. Having just opened his own gym, Conner can cross his first major life accomplishment off his very short list. Next up: find a man he can settle down with and build a family. Seems simple enough – a dream most people have, but when he meets Dylan, his carefree, easy-going life is thrown into a tailspin.

Determined to keep Dylan in his life, Conner vows to resurrect Dylan’s long ago buried heart and let love live once more.

Review: This stand-alone story is told in two parts – Dylan as a teenager and Dylan as an adult.

Part 1 – Dylan, Reid, and his brother Shane, were all best friends. Dylan and Shane were the same age and played baseball together, both hoping for scholarships. Eventally, the two confide they are both gay and an amazing relationship happens. This part of the story blew me away. I was literally glued to my reader not wanting to miss a single detail. I absolutely loved Shane, and he and Dylan together were wonderful. Their scenes of discovering each other were very well done. Unfortunately, that is the good news. The bad news is that we know from the get go that Shane is gone, though we didn’t know how or why. When we do find out, it is unbelievably heartbreaking. Shane, being the older brother, takes the brunt of abuse from his and Reid’s dispicable excuse for a father. He is continually abused, both mentally and physically, and that is long before anyone finds out Shane is gay. The only shining light in Shane’s life is Dylan.

In Shane’s attempts to hide from his father, things go horribly wrong, Dylan gets caught up in it as well, and major misunderstandings and hurt feelings shatter Shane and Dylan’s world. Shane is unable to cope any longer feeling like he lost the last and only person he ever loved, in addition to dealing with his father and having no way to escape. Unfortunately for Dylan, he is unable to apologize before it is too late.

Part 2 – Eight years have passed, and Dylan is still a mess. He has been reuinted with Reid, who had his own issues with Shane’s death. Reid is doing better, but Dylan is still unable to let go of the guilt he has over not saying he was sorry or being able to help or prevent Shane’s actions. Afraid of losing again, he refuses to allow himself to become a part of any meaningful relationships. That is, until he meets Conner. Conner is healing as well, from a career-ending injury (non-career related) and the loss of his parents. He is finally seeing the light as he and his sister open a new gym and get their new lives on track.

I liked Conner. He was playful and sexy and just an all-around good guy. He didn’t take crap from or let Dylan push him around too much with his issues. Their intimate scenes together were also well done. These guys were good for each other and ended up being just what the other needed. Dylan, with the help of Reid and seeing an actual therapist, was finally able to see his life differently.

I really think that because the first part of this story was so amazing, that the second part just didn’t shine as much for me. Shane stole the show for me, and much like Dylan, I had a hard time moving on without him. Every time his story was told, however briefly, by others later in the story, brought the emotions right back up. It isn’t often I get teary over a story, but this one goes on my list. One thing I was hoping to find out and don’t remember seeing is whatever happened to Shane and Reid’s father.

One of the biggest issues for me, and it had me worried from the very first page, was that this story is mostly told in present tense. It is my very least favorite style of writing, in that it pulls me off the page and out of the story constantly. Thankfully, I didn’t notice it as much once the story got moving and didn’t notice it again until later in the second part. I hope Ms. Collins decides to try her hand at more m/m stories, because I, for one, would definitley be interested in reading them.