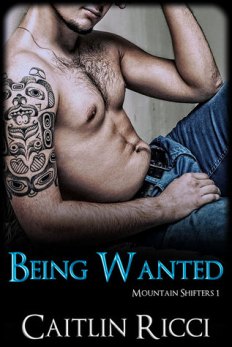 Blurb: For Cole, life used to be simple. He was a military man and knew where he stood in the world. But that was all before the first of the cats came. Now, years later, all but the strongest of the human race have been killed off by the aliens, and those that are left are their slaves. Day and night, Cole is forced to help destroy the human world and return his planet to the way it was before the humans took over.

He’s able to escape, just barely, but an accident leaves him injured and at the mercy of people he can’t be sure are there to help him. There’s a man there that catches his interest, but finding time for a relationship when the world is going to hell around him isn’t exactly going to happen. These people offer him safety and hope, but Cole isn’t sure who he can trust anymore, and love might just be the most dangerous risk of all.

My first deer shifter book, and I am loving it. Gentle and graceful men with big eyes, but also alphas who are tough and badass…the best of both worlds for a girl like me. But all is not sweet and gentle and graceful…no way, it’s a harsh land with a dystopian society that the humans and deer shifters must share with the evil and cruel cat shifters.

Cole is a human serviceman who was serving in the Middle East when the alien shifters came to earth with the intent of enslaving or killing off the humans and returning the planet to its natural state. Cole is enslaved by the cats for a decade before he is finally able to escape…only to be rescued and then re-enslaved by the deer. Pissed off is putting it mildly when Cole realizes he escaped one prison for another.

Julian is an extremely small male deer who chooses to be a kitchen servant for the royal family and is one of the gentlest MM characters I’ve ever read about. I just adored him and his sweetness. Cole did too, but he is not happy with his predicament so he doesn’t want anything but to escape again. It doesn’t take long for these two “mates” to realize that they are destined for each other, though, and I thoroughly enjoyed watching them as their relationship blossomed. Super sweet and super hot…a great combination.

Things move pretty fast, and there are many unexpected twists and turns, lots of unresolved issues, different story lines with multiple interesting side character…and a cliffhanger. But, this is only the first book, and it’s expected to have a continuing storyline and I, for one, am looking forward to seeing where the next book is heading.