A Taste for Poison by Aleksander Voinov Virtual Tour + Giveaway!

Posted on October 14, 2014 by thebloggergirls

About A Taste for Poison 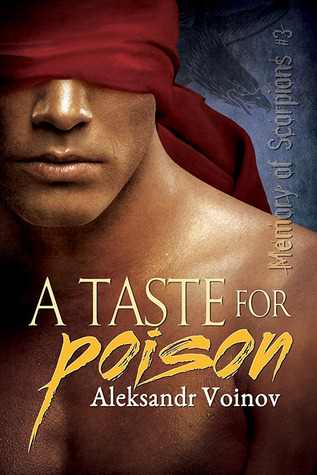 Even a king gets stung when he reaches for a scorpion.

After barely surviving an assassination attempt, King Adrastes is a changed man—one who mistrusts even his allies and friends. He readies his empire for war against an enigmatic enemy, the Elder of Vededrin, but not everyone approves. While courtiers dare only to whisper dissent, an outrider called Death foments rebellion in the mountains, aided by a prophecy that promises he’ll stop the Black King.

Kendras—former lover to Adrastes and leader of the Scorpions—is sent with his elite mercenary force to bring Death to justice. But when Kendras learns who’s hiding behind the mask, he must choose between his lover Graukar, newly-appointed general to the king—and King Adrastes himself.

With no man to call master, the Scorpions could flee the danger and intrigue. But Kendras cannot abandon the man he once loved—or the man he’s growing to love—without first uncovering the real threat to the Empire.

Available at: Riptide Publishing and Amazon

Aleksandr has been published for twenty years, both in print and ebook. He has ten years’ experience as a writing coach, book doctor, and writing teacher, and until recently worked as an editor in financial services.

After co-authoring the M/M military cult classic Special Forces, Aleksandr embarked on a quest to write gritty, edgy, sometimes literary M/M and gay fiction (much of which is romance/erotica)—the only way he can use his American Literature degree these days.

He’s been published with Heyne/Random House, Carina Press, Samhain Publishing, and others, and is an EPIC Awards winner and a Lambda Awards finalist.

As part of this blog tour, Aleks is giving away a full set of the Memory of Scorpions series in paperback to one lucky winner!! To enter, just click the link below!

Don’t forget to check out Gyn’s review of A Taste for Poison to see what she thought of it!

9 thoughts on “A Taste for Poison by Aleksander Voinov Virtual Tour + Giveaway!”