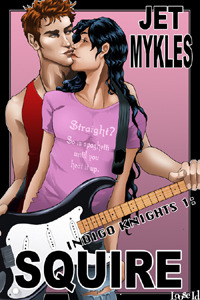 Squire is the first book in the Indigo Knights series: a spinoff from the Heaven Sent series…which I loved.  I remember that I held off on reading these, waiting for more than just a few books to be released, then I forgot all about them!  And then we chose Jet Mykles to be our featured author for the month…

Squire tells the story of Rabin Squire (oh, now that is explains the title!) and Izzy (Brent’s cousin).  Rabin was introduced in Genesis, book 5 of Heaven Sent…I think, when he had to stand in for Brent when he broke his hand right before a big performance.  With Brent’s help, Rabin is trying to rebuild his band Indigo Knights and is staying with Brent and Hell until his best friend and bandmate Zane is able to move up to Chicago with him.  Rabin has always considered himself straight, but he recently claimed to be “undecided”, but when he meets Izzy and discovers that sex with a man “feels right”, Rabin just might be gay after all.

I really liked this book.  It’s easy, has good tension, and the romance is pretty believable even though Rabin didn’t have much trouble accepting his newly discovered sexuality.  Plus, the bedroom scenes with Rabin and Izzy were pretty sexy.

There was a little bit of angst when Rabin decided to move away, but it didn’t get all that exciting…and it didn’t take Rabin long to come to his senses. There isn’t much else to say about this story, but it was a fun, simple read.  It could probably be read without reading the Heaven Sent books since I could barely remember Brent or Hell and I don’t think it hindered my enjoyment of Rabin’s story at all.

My one complaint is that it kinda left Rabin’s friendship with Zane hanging, so I’m curious to see if that gets resolved in a later book…

I’m very interested in reading Danny’s story…which I see is the next book Champion.