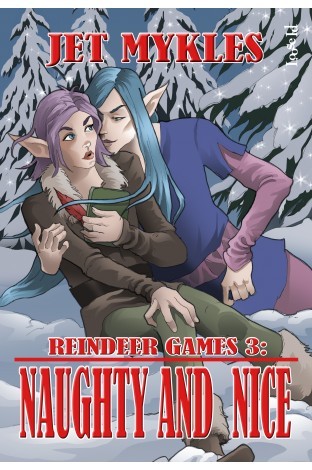 Until Shaw appears in front of him. The drab little elf from Archives isn’t anything like Rom’s other partners. Oh, he’s cute, but he doesn’t knows it. Even more amazing, he seems immune to Rom’s flirting. It’s almost like he doesn’t want Rom. Wait, no. When Rom does proposition him, Shaw turns him down flat.

Even more amazing, Rom is hooked. He can’t get Shaw out of his mind. He even goes to the Library to pursue him. But Shaw — and Shaw’s mother — can’t figure out what Rom would want with him.

Well, Rom’s not entirely sure either but he knows he wants to find out. Can he convince Shaw?
END_OF_DOCUMENT_TOKEN_TO_BE_REPLACED

Blurb: The Weiss Strande Hotel is in trouble. Business just isn’t what it used to be when Tyler’s father ran the family-owned hotel. On top of business being down, dad’s sick with cancer and bills have skyrocketed.

Desperate to save his family interest, Tyler and his best friend sink their hopes and what’s left of their money into a new venture: a nightclub at the hotel. It’s imperative that the White Room is a success, or else the hotel will go under. Lady Luck seems to be with them, however, because they manage to sign the mega-popular rock group Heaven Sent to play the grand opening.

Already a huge fan of the group, Tyler couldn’t be more excited to welcome them to his hotel. He’s not at all prepared for the bomb of lust that hits him when he’s finally face-to-face with the painfully gorgeous lead singer, Johnnie Heaven. No, it couldn’t be lust. Yes, Johnnie’s probably the most beautiful person he’s ever seen, but Tyler is straight. It must be a misguided form of hero worship that he’s feeling.

Tyler finds out that he and Johnnie share an obsession: video games. When Johnnie invites Tyler to his room to play, Tyler jumps at the chance. Who wouldn’t snap up the opportunity to spend time with their idol? He and Johnnie have a great time with the games, but Tyler soon discovers that Johnnie’s got more in mind. The rock star aims to introduce Tyler to a whole new level of game play.

END_OF_DOCUMENT_TOKEN_TO_BE_REPLACED

Even though he knows he shouldn’t, Danny’s unable to resist introducing Cash to the wonders of sex. He didn’t expect to get addicted to Cash’s charms.
END_OF_DOCUMENT_TOKEN_TO_BE_REPLACED

END_OF_DOCUMENT_TOKEN_TO_BE_REPLACED

Blurb:  What ties you to your lover? Love, need, desire, scarves, rope or ribbons. Enjoy Key To Me by multi-talented author and artist Jet Mykles.

This short story is also included in the TIES THAT BIND anthology.
END_OF_DOCUMENT_TOKEN_TO_BE_REPLACED

Posted on October 26, 2014 by thebloggergirls

When I started this writing gig back in 2005, I wouldn’t have thought I’d be writing rock stars. No, I was — still am — a fantasy/paranormal girl. That’s what I like to read and my first series at Loose Id is high fantasy (Dark Elves). That’s what’s always intrigued me.

So, why rock stars? Well, have you seen Johnnie and Luc? Yeah, I was a goner. Many of my younger years were dedicated to a serious Duran Duran obsession and I think the love of a fan comes through in that series, although my band bears only a little resemblance to the fantasies of my youth. I mean, really. I’ve heard of bands that get along but my guys are just too good to each other. And to have them all turn gay when they didn’t start off that way? So actually I was still writing fantasy.

Seriously though, I had just started writing m/m and only had one that was published at the time (the original Snagged). I’d had enough discussions with one of my mentors and she convinced me that I could do this gay thing. So I had two ideas for my next story, one was about a technical support guy and another was about a hotel manager and a rock star. Loose Id chose the rock star. Johnnie Heaven was born. And isn’t he larger than life? The hair was the first thing that solidified, then the eyes. There was no doubt he was the lead singer. He kind of had to be. But Tyler cinched it for me. Coming up with my clueless hotel manager was a pleasure. He jumped off the page, seemingly unassuming, but he stole my heart as quickly as he stole Johnnie’s.

The story, as I remember it, was a pleasure to write. Perhaps I’m forgetting some pain, but it was years ago so I can be forgiven. I know there are at least two scenes in the book that were originally written for other stories. I will admit to being hugely into yaoi at the time so that was a heavy influence. It was a hit with my critique partners and with my beta readers.

Then came Luc. He started taking over while I was still writing Heaven, to be honest. Which is probably why he serves as Johnnie’s competition for a while. Luc is everything that made my younger heart race, down to the instrument he plays. Johnnie was the lure but Luc was it for me. I so wanted to be Reese!

That’s not to say that I don’t love Brent, Hell and Darien. I do (although, Brent and Hell gave me fits writing that book so I wasn’t so happy with them at the time). I also love the guys in the Indigo Knights. But I have to admit that Heaven Sent is all about Johnnie and Luc for me, even now.

So, to all you Heaven Sent fans out there, thanks so much for following me and the boys through their journey. And, by the way, the technical support guy story? I did write it. It’s called Tech Support.

Donny “Foxy” Foxley is hot. Noble knows it. All those screaming teen girls know it. And so does the production company with their millions staked on the teen idol’s dreamy good looks.

So when the supposedly straight movie star comes onto him, Noble is floored. Never one to ignore the allure of a pretty young man, Noble can’t resist and doesn’t even try. Why should he? Even if it has to be a secret, he’d be crazy to pass up a night of sexytimes with the one man everyone wants.

But one night turns into two, then blossoms into a friendship with the potential for so much more. If that’s what Noble was after, which he’s not. But Foxy gets under Noble’s skin until he cares way too much. Because there can never be anything but sex between them. To the world, Foxy is straight and Noble is anything but.

Available at: Loose Id and Amazon

As far back as junior high, Jet used to write sex stories for friends involving their favorite pop icons of the time. To this day, she hasn’t stopped writing sex, although her knowledge on the subject has vastly improved.

An ardent fan of fantasy and science fiction sagas, Jet prefers to live in a world of imagination where dragons are real, elves are commonplace, vampires are just people with special diets and lycanthropes live next door.

As part of this author week, Jet has graciously offered up $10 Loose Id gift certificate to one lucky winner!! The giveaway starts now and ends November 1st, 2014 at 11:59 p.m. To enter, just click the link below!

Don’t forget to check out this week’s reviews from Jet Mykles!

Posted on October 26, 2014 by thebloggergirls

Blurb: Justin falls for Kevin the instant they pass each other on a sidewalk. Only, Kevin’s not gay. The higher ups at Kevin’s company are gay, however, and Kevin’s accidental meeting with Justin gives him an idea how to get around his controlling female supervisor. If he can gain access to the top men at an exclusive gay club, he might be able to finally share his ideas.

Justin instantly agrees to be his date, despite the obvious heartbreak that’s headed his way for going out with a straight man. At the club, Kevin gets a chance to meet the company owner, Victor Chen, and the man seems interested… both in his ideas and his date.

Kevin can’t deny his attraction to Justin, but he’s not gay. Right? He should step aside and let Justin have a chance to date Victor, who’s gorgeous, rich, and shares Justin’s interest in fashion. Despite his internal struggles, he really wants to explore their growing bond. Justin is certainly game, but a part of him knows they can’t have a future together. Is there more to their instant attraction than either suspect?
END_OF_DOCUMENT_TOKEN_TO_BE_REPLACED