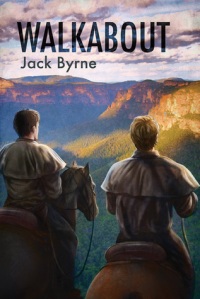 Blurb: In New South Wales, Australia, in 1876, sweating out a living from the savage, dry wilderness tests a man’s worth. Cattleman Jim Kelly gave up everything he knew to outrun the law with his lover Mark Turner. Struggling to survive, the two turn to crime and venture farther into the harsh outback. And while Jim is enthralled by Mark’s almost paranormal strength and physical power, he starts to question his love after seeing Mark’s explosive temper first hand.

Walkabout picks up just a few days after the end of The Billabong. Jim is trying to get used to his new life on the run with Mark and soon discovers a new side to his lover that he’s not so sure he likes. Is Jim going to stick with Mark for the long haul?

Okay, I REALLY enjoyed the first book, The Billabong, and even gave it 4 stars. It was such a beautiful little story. But, for me, Walkabout doesn’t quite live up to my expectations.

On one hand, there was just too many different things going on for a short story: Jim and Mark rescued an injured man, held up a family wagon, worked as drovers for a few weeks and got into a bar fight that left them in a bit of a predicament at the end…all the while having sex every time they could chance it. There was almost more sex than story, and what story existed, was more scattered than cohesive. There’s even hints of paranormal thrown into the mix.

On the other hand, I love the danger and excitement between Jim and Mark. I love the commitment that they’ve made to each other knowing that they could both meet their end tomorrow. And I even liked the crazy WhatTheFuck ending…now I HAVE to read the next installment of their adventure.

Overall Impression: It Was Good