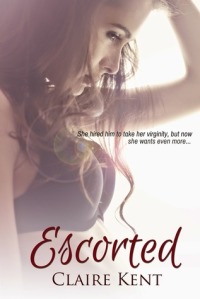 Blurb: She hired him to take her virginity…but now she wants even more.

Lori might be a popular romance writer, but she’s never been anything but a flop with sex and love in her personal life. Still a virgin at twenty-six and increasingly frustrated by her inexperience, she decides to take matters into her own hands. She hires a talented, sexy male escort to take care of her inconvenient virginity.

She assumes one time with Ander will be enough, but she never dreams how much pleasure he can make her feel. Once isn’t nearly enough. Twice isn’t enough either. Soon, she becomes one of his regular clients.

Lori knows that nothing would be as foolish as falling in love with her paid escort, but she’s never been wise with her heart. And, despite his professionalism, he doesn’t seem entirely immune either.

Escorted tells the story of Lori, a successful romance writer who can’t seem to lose her virginity so she hires a male professional to do it properly. Little does Lori know, she will never get tired of her “engagements” with Ander and soon the lines of their “professional” relationship are blurred.

I almost didn’t want to call it an erotic romance because the sex between Lori and Ander was very clinical and technical in the beginning. It’s sad to think that there really are women out there like Lori who know nearly nothing about their own bodies. Anyway, Ander was very professional and their relationship never once felt sleazy or tacky. No, Ander was very well paid and classy. And THEN…it was obvious Ander was starting to feel more for Lori than just a client, and THAT is when I really started feeling the passion in their encounters. Plus, I didn’t feel that the encounters were repetitive…they seemed to progress the story along.

My complaint: I WANTED parts told from Ander’s POV. Like I already said, it was obvious that Ander had feelings for Lori and it was even more obvious what he was REALLY up to, so I think the story would have been more powerful if I could have “seen” some of his side of the story. It’s all third person from Lori’s POV. I did see there is a follow-up short story called Breaking told from Ander’s POV that I MUST get my hands on soon.