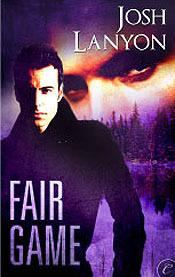 Blurb: A crippling knee injury forced Elliot Mills to trade in his FBI badge for dusty chalkboards and bored college students. Now a history professor at Puget Sound university, the former agent has put his old life behind him—but it seems his old life isn’t finished with him.

A young man has gone missing from campus—and as a favor to a family friend, Elliot agrees to do a little sniffing around. His investigations bring him face-to-face with his former lover, Tucker Lance, the special agent handling the case.

Things ended badly with Tucker, and neither man is ready to back down on the fight that drove them apart. But they have to figure out a way to move beyond their past and work together as more men go missing and Elliot becomes the target in a killer’s obsessive game…

I loved both Elliot and Tucker, and I loved how they struggled mightily before they got their happy-for-now, but… I was thrown off; I felt as if I was missing something, like maybe this was book two instead of book one in the series. I love reading about established couples, yet this didn’t quite fit that bill, but it was close. I needed to know more about their relationship in the beginning, but was left wanting more during the entire read.

The missing students/murder mystery was excellent. Tucker and Elliot’s relationship issues were secondary to the main story, and I didn’t realize until more than halfway through that I hadn’t even read a sex scene yet…and didn’t miss it. For someone who likes her alpha males getting all smexy, that says something about the writing…it says it’s excellent and you need to read it.

Elliot’s dad was really a great secondary character. I am really excited to read book two, because I know that he will play a big part, and I am looking forward to it. The other secondary characters were well developed and played an integral part in keeping the mystery rolling and kept me guessing. I was wrong in who the killer was, and was expertly led astray by the author. That’s very important in a MM romance novel that has limited sex and the relationship isn’t resolved until late in the book.

I have a love-hate relationship with Josh Lanyon. I have 5 starred many of this author’s books, but I’ve also 3 starred just as many. This one was a winner, and had I not felt like I was missing something in the beginning, this would have been in the 5 star category as well. Highly recommended and now I’m off to read book two.