Posted on December 1, 2014 by thebloggergirls 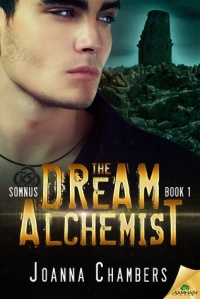 Blurb: When the sun goes down, their passion awakens…and so do their nightmares.

Centuries ago, a man with Bryn Llewelyn’s dreamwalking ability would have been a shaman or a priest. In this time, he’s merely exhausted, strung out on too much caffeine and too little sleep.

Sleep means descent into Somnus—an alternate reality constructed of the combined dreaming consciousness of ordinary humans. A place he’d rather avoid. Trouble is, his powers don’t include the ability to go without sleep indefinitely. At some point his eyes close…and his nightmare begins.

As a teen, the treatment that cured Laszlo Grimm’s sleep disorder stole his dreams—and his ability to feel emotion. Petrified of needing more “treatment”, he clings to familiar rituals and habits. But lately his nightly terror has returned, and when he meets Bryn in the real world, the man seems hauntingly familiar. Not only that, Bryn awakens feelings in Laszlo for the first time in years…

Slowly Bryn and Laszlo realize they are both unknowing pawns in a plan of unspeakable evil. And that their powerful attraction could release the destinies locked within them—or be the instrument of their doom.

Review: Now I lay me down to sleep– screw that! I’ve got the new Joanna Chambers novel, The Dream Alchemist to read! I know she can write. She can write a helluva historical. But can she write a paranormal/sci-fi? The answer is oh-my-heavens-yes-she-frickin-can-oh-hell-yeah. Chambers managed to dream up a completely original, exciting and sexy world in The Dream Alchemist.

This story is not your typical paranormal/science fiction story, yet it has all of my favorite elements of such. We have Bryn. He’s young and a little bohemian and a little messed up. He’s a dreamwalker, which makes him special but then he’s also an alchemist, which makes him unique and powerful amongst his peers. I love when not only does a world involve unique beings, but also the main characters are special and set apart from the world. And when two powerful dreamwalkers collide, whoa mamma!

Laszlo is late to the game of dreams, but his waking life has been filled with plenty of nightmares. It takes Bryn to free him in both worlds, and together they are an unstoppable force. There’s almost a feel of ‘mates’ in this book in that their encounters are very intense and immediate, yet the author doesn’t quite cross over that line. I think it was the only thing holding me back from a full 5 stars, because I wanted that line in the sand. It’s a matter of personal opinion, but for me, if the author is going to make a pairing that’s so forceful, I want to know if it’s something in the paranormal world that’s making it happen, and if not, then the insta-tensity just feels a little off. But, don’t get me wrong, I still loved Bryn and Laszlo together and how powerful their connection was.

So we’ve got super special characters, a throbbing connection between MCs, and a world that is one of a kind and solidly built. There’s also excellent secondary characters and a plot that is built to be long term. Add that to the classic good versus evil and which is which trope AND add that to the author’s ability to make you want to keep turning the page, and you can see why this book will stand out in a crowd of drones!