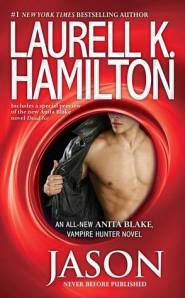 Blurb:  “Enjoying pain with your pleasure is something you either get, or you don’t. If you get it, then you don’t really need it explained, because you know how good it feels, and if you don’t get it then no amount of talking is going to convince you it makes sense.”

But sometimes you have to explain the unexplainable, especially if the love of your life needs to understand, or she’ll leave you. Jason Schuyler is one of Anita Blake’s best friends and favorite werewolves, with benefits. J.J. is his lady love, an old flame from childhood who dances at one of the top ballet companies in New York. She’s accomplished, beautiful, and she’s crazy about him, too. Neither of them wants to be monogamous, so what could go wrong?

J.J. is enthusiastically bisexual, with an emphasis on the female side of things. She plans to keep sleeping with women, because Jason can’t meet that need, just like she can’t meet Jason’s need for rough sex and bondage. J.J. doesn’t understand why Jason isn’t content to go elsewhere for a need she can’t fulfil, so Jason asks Anita to help him explain.

Anita is having her own relationship growing pains with her only female lover ever, Jade. Jason suggests that J.J. might be able to help Anita with her girl problem, while she helps him with his kinky explanations. With some encouragement from a few other lovers in Anita’s life she reluctantly agrees, and J. J. makes plans to fly into town for an experience that none of them will ever forget.

I have loved Jason from the very beginning of the this series, so when I saw he was finally getting a book, I was thrilled. I admit, I didn’t even read the blurb on this one, which I probably should have. But Jason has played a pretty solid role up to this point, both in Jean Claude’s life, as well as Anita’s, and I really wanted to see more happen for him.

Now, however, he has a girlfriend, and he is in love. J.J. is bi-sexual and has a very jealous live-in girlfriend. That isn’t the main issue here though. No, that would be the rough sex Jason needs to have every so often, which J.J. is having trouble understanding. So, Jason, with the help of Nathanial and Domino, talks Anita into helping him explain, in person, together.

Anita is having some issues of her own dealing with all of her men, in addition to the female she now has in her harem, Jade. Jade is a lesbian, who, if you recall, was saved from an evil, abusive and manipulative bastard of a master. So, she has some major issues which are not helping Anita get past her own issues of being with a woman.

What does all this mean? Sex, sex and more sex. I know many of the later books in this series have had a lot of sex, but this one is almost all sex, with the exception of them having a meeting about sex in the beginning.  Anita agrees to help show J.J. what they actually mean by rough sex, and J.J. agrees to help Anita with her lesbian skills.  The rest of the story is that playing out and their conclusions about what to do with their respective relationships.

I was a bit disappointed this didn’t have any other plot besides fixing these relationship issues. No mention really about what was going on in the series other than how the different characters were coping or not coping with the sex or lack thereof of the right kind of sex. Jean Claude is mentioned, but not so much as a single Ma Petite is heard from him. It was great to see these characters again, but I was really hoping for more of the actual story. Thankfully, it seems things may go back in that direction in the next book.

Overall Impression: It was ok.

One thought on “Book Review: Jason by Laurell K. Hamilton”