Posted on December 4, 2014 by thebloggergirls

The Making of a Marine

Robert Cummings and I decided to do a short story involving two Marine Recruits who are gay and leaving home to join for different reasons.

Since both Robert and I are former military, I’m former Police and Robert is current Police, we understand each other’s minds. Oh, and of course, we’re both gay.

We decided to show how the Marine Corps might be changing since it was the one that fought the hardest against the repeal of Don’t Ask, Don’t Tell.

There has also been  a murder committed by a Marine against a member of the LGBT community since repeal, and this story attempts to portray the Marine Corps in a light that is better seen. 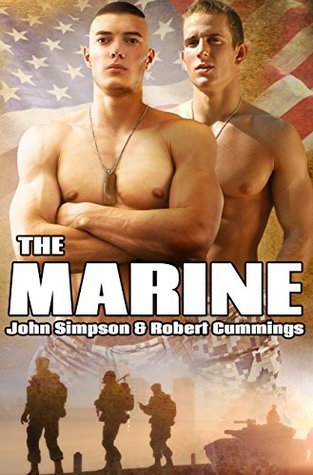 Two young men, David Stauffer and Matthew Kendricks, meet while processing into the Marine Corps for Basic Training.  David is immediately attracted to the red haired, Matthew. As their training begins, David pursues Matthew to find out if the attraction is mutual.  To his great pleasure, David learns that his attentions are not unwelcomed, but rather feared. Matthew, unlike David isn’t as comfortable with his fellow trainees finding out he’s gay.

As training progresses David proves himself to be superior to the other trainees. As a reward, he is given   a short, on post leave and is allowed to take Matthew with him. This allows them a chance to explore each other’s bodies, rather than just glimpses in the showers.

From that moment the spark between the two burns hot and sets the stage for what is to come. When training ends, questions about their futures arise. Both men are forced to make decisions that will impact their futures, and potentially out them to the entire Marine Corps.

An Excerpt from The Marine

David and Matthew were drawn to each other like magnets. This was one of the few times they could lay on top of each other without anyone commenting on it. The tight green shirt pressed against David’s lean chest, Matthew licked his lips as they squared off to attack.

David charged at Matthew full speed, the boy attempted to grab David’s wrist but was unsuccessful. David did not want to humiliate the Matthew in front of anyone so he stopped and backed up. He laid his hand on top of Matthew’s and placed the clammy hand where it needed to be for a successful hip throw.

Matthews’s shorts began to bulge out in the front, “Flip me.”

“You didn’t do yours yet,” David said confused.

David smiled and grabbed the red head’s wrist. He flipped him onto the mat and leaned down to help him up. David pulled Matthew up.  While he dusted his back off he slightly brushed his hand against Matthews tight little bubble butt.

A drill instructor came over to them, “What in the ever loving world are you two doing? I better see more flipping and less jawing, do you get me!”

John Simpson is a Vietnam Era Veteran, former Police Officer of the Year, a Federal Agent, a Federal Magistrate, an armed bodyguard to Saudi Royalty, a senior Federal Government executive, and recipient of awards from the Vice President of the United States and the Secretary of Treasury. He has just been hired by an international film production company to become a main script writer, and will start soon on a television series.

John feels that for too long fiction writers neglected gay men. John writes entertaining, enjoyable, and enthralling fiction centered on the lives and lifestyles of gay men. John allows his readers to see life through gay men’s’ eyes. And just like real life, John’s characters have active and exciting sex lives. John calls on his broad personal and professional experience in writing gay romance. John is author of numerous full length novels available through Dreamspinner Press and several short stories in Alyson Books anthologies.  His first book, Murder Most Gay, is based on the murder of a gay man in Orlando, Florida in 1980, which he investigated along with many others, as an intern from UCF in the legal program. The Orange County State’s Attorney’s Office utilized his prior experience as a police officer in many ways, including proving a suicide was in fact a homicide.

John lives with his partner of 39 years who he legally married in 2008, and their three Scottish Terriers. John is highly involved with the Church, specifically seeking to repair rifts between Christendom and the gay community. John graduated from the University of Central Florida in 1981, and received an S.T.L. in 1995.

John wishes to extend a very special thanks to his many female readers. He appreciates and loves the fact women enjoy male/male erotica, and he thanks you for your past and continued support. He hopes to never disappoint you, and always leave you wanting more!

John now has a total of over 40 full length novels in print as well as another 20 novellas and short stories!

Robert Cummings lives in Pennsylvania with his partner and their black lab mix dog. Robert is an Iraqi freedom veteran with a seventeen-year law enforcement career. He enjoys the outdoors, family, and travel.

Find out more about Robert on his Facebook or email him at robert.cummings1976@gmail.com.

As part of this blog tour, John and Robert are giving away two eBook copies of The Marine!! To enter, just click the link below!

Don’t forget to check out JustJen’s review of The Marine to see what she thought of it!