Posted on December 10, 2014 by thebloggergirls

Gaming While Female: Why I Wrote Player vs Player

Hi, and welcome to the Player vs. Player blog tour!

In my last post on the tour, I described how being a gamer led me to publishing original m/m romance. Now I want to take the opportunity to discuss some of the background that led me to write Player vs. Player specifically.

Dragon Age: Origins was groundbreaking in that it was one of the first RPGs to allow same-sex romances. But one bone of contention was that there were some characters who were inaccessible for a same-sex relationship (unless you used player-made modifications to get around those restrictions, which were by no means perfect because they might result in characters referring to your male player character as female or vice versa.) Alistair, the sweet and awkward bastard heir to the throne, hit even my gaydar (which is almost non-existent) but he could only be romanced by a female PC.

Meanwhile, the love interest characters who were capable of being romanced by player characters of the same sex were also available for romance by player characters of the opposite sex. In fact, there was some well-deserved backlash against a moment where bisexual Zevran tells his love interest that he’s amenable to men, but he prefers women. “You’re not my first choice, but you’ll do.” Just what every gay guy wants to hear from the man they love, right?

Then Dragon Age II came out, and BioWare did something new. They made ALL the characters who had romance storylines available to player characters of either gender. There was endless discussion about whether this meant your PC had four bisexual companions, or whether the character was simply “Hawke-sexual” (Hawke being the name of the player character.)

This was really great for the players who felt restricted by the romance option limitations in Dragon Age: Origins, but it resulted in a torrent of new complaints from straight dude-bro gamers whose masculinity was threatened by the fact that a male character might flirt with them until they chose the dialogue option to let him know they weren’t interested (at which point they felt they were being penalized because it would lose them approval points from the character in question.)

One particularly vocal complainer made repeated threads saying that BioWare was neglecting its core demographic, the straight male gamer. David Gaider, the lead writer for Dragon Age: Origins and Dragon Age II, had a rather brilliant rebuttal to that. While Gaider is by no means an un-problematic figure, sometimes he gets it very, very right, and this was one of those times.

But the dude-bro gamers weren’t done with their toxic attacks against BioWare writers. In the summer of 2012, former BioWare writer Jennifer Hepler created a twitter account. Within days, someone had resurrected a years-old post she made where she suggested that gaming might trend in the direction of offering players an opportunity to skip the hack-and-slash combat and simply walk through the story.

This is by no means a new suggestion. Disabled gamers have often complained about the need to play through grueling battle sequences they might not even be physically capable of getting through in order to progress through the game. Overpowered player-made modifications to put the player character into “god mode” and thus end combat with a click of a button have been in place almost since the beginning. As gaming becomes more story-centric and less focused on combat mechanics, a “tourist mode” is a common-sense evolution.

For this, Hepler was called “the cancer that is killing BioWare.” (Trigger Warning for, like, everything, especially if you venture down the rabbit-hole of the comments or the links to Reddit.) Her phone number was made public and she began receiving harassing calls, as well as tweets and emails that included rampant misogyny and graphic threats to kill her children.

BioWare spoke up in her defense, but it took several days and possibly was only due to the fact that the feminist BioWare fans were very vocal about demanding that they do so.

Then, later that same year, came Anita Sarkeesian and her Tropes vs. Women in Video Games Kickstarter. (Again, extreme trigger warning, both for these links and anything I discuss past this point.)

It seems like a fairly straightforward project, right? Discuss video games and the way they handle portrayals of female characters. Well, apparently this was infuriating enough to the dudebro gamers that they posted violent and toxic comments on the YouTube video for the Kickstarter project. They launched DDoS attacks against the Feminist Frequency website and reported her YouTube channel and KickStarter page for hate speech and promoting terrorism. They vandalized her Wikipedia page, and created obscene memes about her and even a created a game that would “punch” her and create a bruise each time you clicked on her face.

If you would like to see Anita describe the events in her own words, I highly recommend her TED talk video.

Now, you’ve probably heard rumblings recently about something called GamerGate and more misogynist attacks on women in gaming. But I wrote Player vs. Player before any of that happened. Just based on the incidences I’ve mentioned above. And those were more than enough.

But then since August, the misogynist terrorism leveled against women in the gaming industry has reached new lows. I’ve complained that I wrote PvP a year too early, because I was already done editing it by the time GamerGate rolled around.

What is GamerGate? Others have said it better than I. This is a particularly enlightening series of tweets, complete with screencaptures of the plotting behind GamerGate. In short, it’s a targeted campaign of misogynist harassment and terrorist threats against female game developers, journalists, and feminist critics of gaming like Anita Sarkeesian. And yes, when I say terrorism, I mean that quite literally.

In other words, it’s everything Player vs. Player is about. When I started writing PvP, I came at it from the mindset of, “Wow, these incidences of threats and harassment are really scary, because what if one of these dudes decides to up the ante?” Because that’s what bullies do. They egg each other on, encourage each other to get more and more outrageous and violent, and eventually someone decides to take it past verbal harassment and make it physical.

Thankfully, that hasn’t happened yet. But we’re seeing people driven from their homes by credible threats following the leaking of their personal and physical contact information by these guys. And that’s truly terrifying.

So that’s why I wrote Player vs. Player. That’s where it came from.

About Player vs. Player 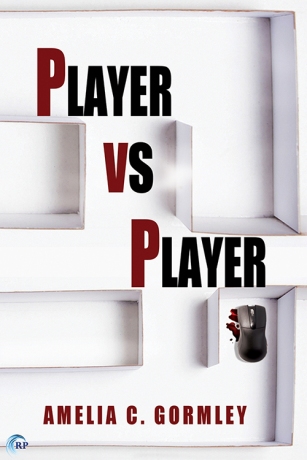 Pushing for change can be dangerous when change starts pushing back.

Video game writer Niles River loves the work he does at Third Wave Studios: creating games with mass appeal that feature women, people of color, and LGBTQ characters. To make his job even better, his best friend is his boss, and his twin brother works beside him. And they mostly agree that being on the forefront of social change is worth dealing with trollish vitriol—Niles is more worried about his clingy ex and their closeted intern’s crush on his brother than he is about internet harassment.

But now the bodies on the ground are no longer virtual, and someone’s started hand-delivering threats to Niles’s door. The vendetta against Third Wave has escalated, and to make matters worse, the investigating detective is an old flame who left Niles heartbroken for a life in the closet.

No change happens without pain, but can Niles justify continuing on with Third Wave when the cost is the blood of others? If he does, the last scene he writes may be his own death.

Every comment on this blog tour enters you in a drawing for a choice of one a book from my backlist (excluding Player vs Player.) Entries close at midnight, Eastern time, on December 13th. Contest is NOT restricted to U.S. entries.