Hot Reads for the Trevor Project – 6 Great Books, 1 Great Cause!

Posted on December 20, 2014 by thebloggergirls

Get ready to lower your thermostat because your winter is about to get hot! For a limited time only, get SIX great reads by some of the hottest authors in M/M! A guilt-free guilty pleasure at an incredibly low price with all proceeds going to The Trevor Project!

ABOUT THE TREVOR PROJECT: 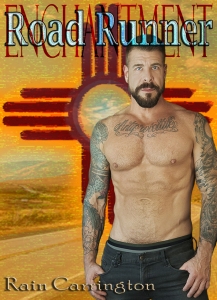 ROAD RUNNER (ENCHANTMENT #1)
By Rain Carrington
In the Land of Enchantment, New Mexico, lives a man who has secrets. Levi Kape watches people at a bar nightly, writing things in his notebook and trying to blend in with the locals. His secrets keep him from getting close to anyone until Bobby Dawes comes off the road after a long haul in his 18-wheeler. After getting to know Bobby, he realizes he’d never been close to anyone. That was about to change.

Levi can’t settle down and not because he doesn’t want to, but because it could endanger his life. Bobby is a gentle, loving and strong man who doesn’t do commitment. He’s also a man that Levi wants more than anything, including his own safety.

Danger causes Levi to leave but he can’t forget the truck driver that drove into his life, changing everything. When Levi leaves, Bobby goes back onto the road, trying to forget the “Golden God” he’d fallen for, but with some help from friends with connections to dark people and places, Bobby finds his man and swears never to let him go again.

Can they save each other not only from the men who want Levi dead but from years of never seeking or finding the love they found in one another? Will the ultimate betrayal cost them the trust they need to make it work between them? Can Bobby save him, or be lost in a dark world alone…

When she isn’t taking out gay bashers with her mean right hook she is at her desk writing steamy stories of man on man love. Rain also spends time with her beloved family and friends and in her spare time maybe sleeps for a few hours.

Rain is an ally in the gay rights crusade, she also loves animals and tries her best to stop animal abuse.

She is at her desk now getting some of her other stories ready for publication and will let them out as she they are ready so keep an eye out for Cabin Fever next!

CAGED: LOVE AND TREACHERY ON THE HIGH SEAS (BAAL’S HEART #1)
By Bey Deckard
Sheltered and lonely, Jon’s life changes drastically when a strange ship sails into the harbour of his small port town one day. Trapped between the possessive pirate captain and his murderous first mate, he must learn to adapt or he will lose himself completely. An epic tale of love, treachery and revelation, this first installment of the Baal’s Heart trilogy brings you into the lives of three men so bound together by jealousy and lies that they must sail to the very ends of the earth to find forgiveness.

Deckard’s first novel is a masterful portrayal of sorrow, hope, and passion, with a narrative that twists the reader through a world set in the Golden Age of Piracy. A thrilling look into the darker side of human nature, Caged effortlessly melds serious historical fantasy with five star erotica.

Born and raised in a small coastal town in northern Québec, Bey spent his early summers on his uncle’s boat and running wild on the beaches of the surrounding islands, lighting fires and building huts out of driftwood and fishermen’s nets. As an adult, he eventually made his way to university and earned a degree in Art History with a strong focus on Anthropology. Primarily a portrait painter and graphic artist, Bey sat down one day and decided to write about the two things that he felt most passionate about: sex and the sea.

Bey currently lives in the wilds of Montréal with his best buddy, a spotty pit bull named Murphy. Caged: Love and Treachery on the High Seas is his first novel. 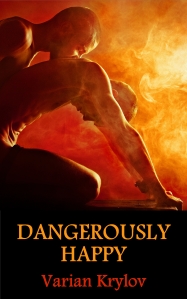 DANGEROUSLY HAPPY
By Varian Krylov
Aidan has always played it safe. Instead of pursuing his dream of creating innovative music that makes his soul sing, he settled for a degree in software, a job in a cubicle, and a spot in a generic band with his buddies.

And he’s always been straight. But when he’s seduced by magnetic local literary luminary Dario, Aidan must decide whether to keep playing it safe, or succumb to a ravenous passion and a nourishing love unlike anything he’s experienced before. Will he find the courage to go after real happiness if it means admitting he’s in love with a man?

Their journey together isn’t easy. Sometimes it isn’t safe. Even if Aidan has the courage to admit he’s in love with Dario, can he endure the repercussions of the traumatic event in Dario’s past?

Since her girlhood in a sunny coastal town in California, Varian Krylov has nurtured a love of words and a curiosity about the deep, dark forces at work in human nature, especially sexuality, and how they often paradoxically twine with our tenderest impulses. Her stories tend to explore the sometimes fine line between what arouses, and what frightens, what we’re driven to, and what we’re ashamed of.

As witty and seductive as I am sarcastic and self-deprecating, I spend as much time as possible thinking and writing about sex. No, not dense, inscrutable post-feminist texts on media representations of gender and the body–that was grad school. I write stories–short stories, novels, and starting a few weeks ago, screenplays–most of which poke and prod and the dark little corners of human sexuality. In a sense, nothing’s taboo, anymore. There’s no act, no fetish that hasn’t been made utterly banal in the proliferation of porn. What intrigues and excites me is the exploration of the conflicting impulses, the twisted psychology and turbulent emotions of people who find themselves unable to resist desires that lie beyond their own moral boundaries.

LUXURIA: THE OSWALD WITCHES
By Mathew Ortiz
Duncan Blackthorne carried a heavy burden for one so young. One of the most powerful witches of the Earth Clans, his singular ability to control fire was both blessing and curse. The wallflower of his family, they had no idea of what turbulent waters churned under his calm surface. Never expecting to find love, he trudged through life, expecting nothing. Until the man in his dreams became more real and insistent, Duncan realized his dream lover was so much more than expected. Suddenly he had a real world dominant that rocked his body and a dreaming ghost lover who captured his heart. Now what the hell was witch to do?

Mathew Ortiz was born in Nuremburg Germany in 197O, the son of a quiet Army man and his loud Hungarian wife. Spending only two years in Germany, his family relocated to Fort Smith, Arkansas where he spent his youth in exile. Here is where he attended primary school and college, obtaining a degree in Nursing. He moved to Phoenix and met the bane and love of his life, Tim. When not on his laptop watching Are You Being Served or Keeping Up Appearances, Matt can be found either napping or reading with gusto.

GRIF’S TOY (TEASE AND DENIAL #1)
By Joseph Lance Tonlet
Grif believes he’ll live his life as a virgin. After all, who would want him? How could anyone find him, a guy who came with less than man-sized equipment, worthy of their love?

What he hadn’t counted on were the two amazing men who would change his life. After entering college, he meets Tate, his fun-loving roommate. While years later, with Tate now just a memory, Wes, a handsome, rugged ex-marine who runs his own security firm enters his life.

Both men lead Grif through a twisted mesh of pleasure, pain, and denial, as they force him to see his value, despite his size and insecurities.

Joseph is a born and raised Southern Californian–with a twenty-year stint of living in the Midwest. He loves the laid-back lifestyle of San Diego and considers himself lucky to live where people dream of vacationing. 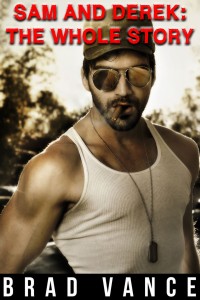 SAM AND DEREK: THE WHOLE STORY
By Brad Vance
Sam Bradford is a down-on-his-luck former Special Forces soldier when he meets Derek Constantine, sexually confused billionaire. Together the two men will play a series of games that bring them ever closer together…and which in the end may be the death of them…

Sam’s Reluctant Submission
Sam’s down to his last five dollars when he meets Derek, who makes him an offer – come to my estate for a manhunt, evade me for two days, and you’ll make ten grand…but if I catch you, you surrender your ass to me! Sam’s got SERE training and he’s pretty sure his straight ass is safe, but anything can happen when the hunt is on…

Sam’s Reluctant Submission II: Urban Manhunt
In Part I, Sam lost his ass to Derek, but kept something more important – Derek submitted him, but didn’t break him, and that’s what Derek really wanted. Now Derek wants a rematch – fifty grand for an urban manhunt, if Sam evades Derek’s crew…if he doesn’t, it’s four on one and Sam’s ass is toast!

Sam’s Reluctant Submission III: Search and Rescue
In Part 2, Sam lost his ass to Derek again – and loved it! Which left him wondering if he was gay after all. Maybe a three way with Jake and Eddie will help him figure that out… And when Derek calls Sam to get his help with a search and rescue effort, what sexual sparks might be generated if they clash again in a “threematch”?

Sam’s Reluctant Submission IV: Avenging Devils
The epic conclusion to the saga of Sam and Derek! When Derek’s dark past rears its head to jeopardize the couple and their friends Jake and Eddie, Sam will have to call on his old Special Forces buddies to do battle with The Factory, a malevolent cartel bent on revenge. Will Sam and Derek rescue Eddie from his kidnappers? Will seeing Sam explore his top side with Eddie make Derek jealous…or make him want Sam to do that to him? Most frightening and dangerous of all, will Derek finally say the L word!

BONUS STORY – Eddie’s MMA Submission – the story of Sam’s friends Eddie and Jake
Eddie works across the street from Downtown Fight Academy. And he can’t stop thinking about Jake, the hot MMA fighter he ran into at the store. When Jake offers to train him, Eddie’s ready to throw down in the Octagon. But when Jake has him submitted, and pulls out a weapon you won’t see on TV, will Eddie tap out…or take the punishment?

Brad Vance writes gay romance, erotica and paranormal stories and novels, including the breakout hits “A Little Too Broken” and “Given the Circumstances.” Keep up with Brad at BradVanceErotica.wordpress.com, email him at BradVanceErotica@gmail.com, and friend him on Facebook.

One thought on “Hot Reads for the Trevor Project – 6 Great Books, 1 Great Cause!”