Book Review: King of Me by R. A. Kaitland 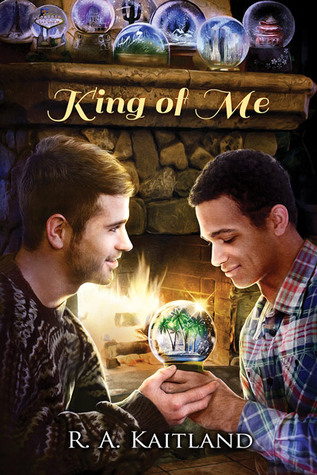 Blurb: Cast out of his clan of shifters and with no family of his own, Anton Cedwell wants nothing more than to be accepted by his partner Sean’s family when the two of them visit over Christmas. But Sean’s powerful father, Flavius, isn’t happy his son chose a shifter as a mate, and Sean is hiding secrets from Anton. When Sean is attacked by rival weres, Anton hopes Sean’s family will finally see the depth of his commitment and how far he’s willing to go to protect the man he loves.

Sean and Anton have been together for a while now and Anton still hasn’t met Sean’s family but when Christmas rolls around, Sean’s determined to merge his two lives together. Unfortunately, Sean has secrets that he can’t tell Anton and when those secrets get them attacked, Anton’s level of devotion towards protecting Sean just might be the thing that sways Sean’s father to approving of Anton.

I enjoyed this one but I didn’t really understand it. It was an intriguing world and I liked that there were clans of shifters but I was confused about everything. Why Anton was supposed to kill Anton when it was mentioned that Sean’s family has been ignored because they could become powerful or WHO wanted Sean killed. I would have just liked a longer story to really give the story depth and characterization that it so deserved.

In the end, it’s an interesting story but it’s not nearly long enough to really live up to the potential that it has. I liked Sean and Anton but I didn’t feel connected to them or to their relationship. I found the parts with Sean’s family interesting but I would have liked a much longer story.