Posted on January 4, 2015 by thebloggergirls

To celebrate the release of my new book, Down and Dirty, I’m inviting you to follow along with blog tour serial of a Cole McGinnis case, Dirty Minds! Enter to win a giveaway at every site!

The next day, Bobby came rolling in with a chain of hickeys around his neck. He sure as hell didn’t have them when I saw him at two am. Claudia eyeballed him as he swaggered in.

“Boy, you’ve got to sometimes feed your dates.” She pointed a pencil at his bared throat. “That one you took home last night should have had a sandwich or something before you got down to business.”

“Yeah, he’s a bit…” He slunk past Claudia, trying to avoid the slap she gave his ass. Being a mother of a squillion kids, she got him anyway. I heard the smack from across the room and his booming laugh. “Hey, okay. Next time.”

“Dude, really? You got a booty call at oh-dark-thirty?” I handed Bobby a mug and sat down at my desk. “Shit, Dawson.”

“You be as puritanical as you want to be, Princess. I happen to like sex.” He got himself some coffee. “How about if we talk more about this stupid side case you’ve got going and less about what I’ve got going on the side?”

“Okay, I asked Dex if he could run down the purple Monte Carlo for us.” I’d checked my email before Claudia and Bobby came in but nothing from Wong. “He’s going to do it on the sly. G and J might actually be doing something on the case.”

“If they do, it’s ‘cause Pierce has some pull.” He rubbed his thumb against his fingers. “Boy’s got money.”

“I’ve got money and the cops barely answer the phone when my alarm company calls them,” I pointed out.

“That’s ‘cause your shit blows up every time someone looks at it wrong, boy.” Claudia edged in past Bobby. “They show up when they’re called and God knows what they’re going to walking into. Best wait until there’s a fireball in the sky and then they’ve got a fighting chance.”

“Your faith in me is admirable.” For a church-going, God-fearing woman, Claudia sure knew her way around an evil eye because the one she gave me scorched me down to my ass. I felt like she’d taken me out back and beat me with the leather bag I’d gotten her for her last birthday. “Seriously, all I’ve got is a lead on the former valet. Called the restaurant, hoping to get a hold of the manager but he wasn’t talking. Maybe he thought—”

“Yeah, I went by there before I came here,” Bobby said, sliding a piece of paper out of his back pocket. “Guy was plenty chatty with me.”

“In my neighbourhood, we call that whoring,” Claudia interjected. “That where the vacuum cleaner attacked you? Down at that restaurant?”

“Miss Claudia, I’ll have you know I do not trade sex for information. My hungry companion is someone I know, admire and who probably is still sleeping where I left him, in my bed.” He sniffed, pretending to be insulted but Claudia and I caught the wink he threw her way. “Actually, the manager was pretty nice but said some asshole called earlier, trying to shake him down for info. Like a job reference or something. Since speaking poorly about someone leads to lawsuits these days, he told the guy—probably Cole here—to fuck off.”

“What a dick. I didn’t say it was for a job reference. Just that I was looking for him,” I grunted as I snatched the paper out of Bobby’s fingers. “So did he give you the guy’s name?”

“Better than that.” He smirked. “I not only got the guy’s name. I got his address.”

Part Five — On Top Down Under

About Down and Dirty 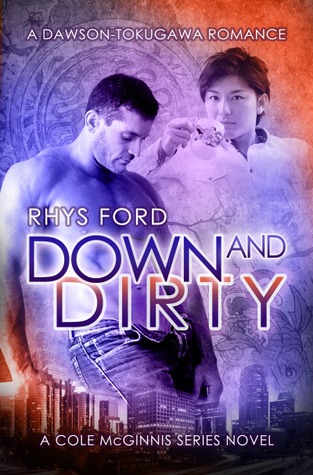 From the moment former LAPD detective Bobby Dawson spots Ichiro Tokugawa, he knows the man is trouble. And not just because the much younger Japanese inker is hot, complicated, and pushes every one of Bobby’s buttons. No, Ichi is trouble because he’s Cole McGinnis’s younger brother and off-limits in every possible way. And Bobby knows that even before Cole threatens to kill him for looking Ichi’s way. But despite his gut telling him Ichi is bad news, Bobby can’t stop looking… or wanting.

As part of this blog tour, Rhys has graciously offered up a $20 Gift Certificate to the e-tailer of their choice to one lucky winner!! The giveaway starts now and ends January 10, 2015 at 11:59 p.m. To enter, just click the link below!

Don’t forget to check out Nikyta’s review of Down and Dirty to see what she thought of it!