Posted on January 21, 2015 by thebloggergirls 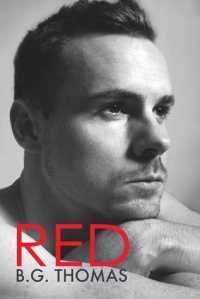 Blurb:  Leslie “Red” Parks was pretty surprised to find he was considered attractive enough to be a male escort. And once he started and the money came rolling in, he found he didn’t want to stop. For the first time in his life, people truly want him, and he likes that. A lot.

Kirk Toliver has never thought of himself as desirable either—which is why he is single. That, and he has spent years of his life caring for his ill mother. Before she passed away, she made him promise he would splurge on something crazy with the money she left him. So what’s crazier than hiring a male escort?

But neither expected that one night together could lead to what was missing in both their lives.

Review: Leslie “Red” is a gorgeous redheaded rentboy. He has become accustomed to the lifestyle being a higher priced rentboy has afforded him, but, something is missing.

Kirk is an average looking guy, not super fit or stylish, etc. He takes his mother’s advice/dying wish for him to do something crazy with the money she left him, so he decides to buy the time of Red, whom he met recently. Kirk is really sweet, innocent and inexperienced, and can’t believe Red is with him, even if he is paying for it. But when Red actually wants to spend time with him outside the job, he is a bit stunned.

Red is realizing that he actually likes spending time with Kirk. He is a bit confused about his own feelings regarding his profession, finding it harder and harder to keep his two lives separated. Has he become Red to be the rentboy, or is Leslie who he is while working? Red/Les and Kirk have more in common than first appears, and though it takes some time, Red/Les realizes Kirk is one of the few people he has been or wants to be Les with. As the two spend more and more time together, their friendship grows, and though they never really discuss it, Kirk seems to be ok with Red’s job. He seems to realize that things are different when Red is with him than when Red is working.

So, this story was a bit about discovery and what was important beyond the superficial. I found it a quick and easy read. I am a sucker for rentboy stories, and I really enjoyed reading this short story. There are some flashbacks showing how Les became Red and got his start in the business. I’m not generally a flashback fan, but, since this is one the aspects I find interesting, it was something I ended up liking. I’d definitely recommend this if you’re a rentboy fan and are looking for a feel good afternoon read. This is my first book by Mr. Thomas, but it definitely won’t be my last.