Posted on April 8, 2015 by thebloggergirls 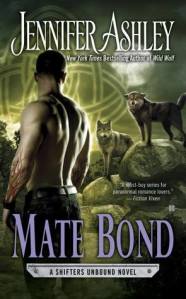 Blurb:  Together but unbound, they must learn what it means to love completely, in the latest novel from the New York Times bestselling author of Wild Wolf.

To cement the leadership of his North Carolina Shiftertown, Bowman O’Donnell agreed to a “mating of convenience.” Two powerful wolf shifters, he and Kenzie keep the pack in order and are adored by all. Bowman would do anything to protect Kenzie, for in each other’s arms they’ve found far more than friendship. But as strong as their attachment is, they still haven’t formed the elusive mate bond—the almost magical joining of true mates.

Now with a monster ravaging the countryside and threatening the Shiftertown community, some in the pack fear that a pair without a true mate bond isn’t strong enough to lead. Bowman and Kenzie will have to rely on their instinctive trust in one another to save their Shifters—and the ensuing battle will either destroy them or give them the chance to seize the love they’ve always craved.

Review: Bowman and Kenzie, are leader mates of the North Carolina Shiftertown. For fifteen years, they have shared a home and a child. They are mates in every way except for the lack of mate bond, the illusory magical connection that ensures two Shifters are partnered for life; it is the bonding of the heart more than just physical and emotional side of love.

The absence of the mate bond, in addition to Bowman and Kenzie being an established couple with a twelve-year old cub, makes Mate Bond – the seventh novel in Jennifer Ashley’s Shifters Unbound – different than the previous books. There is no instant-attraction and the fast-paced process of mating. In its place, there is heartfelt desire, that most of the times feel solemn, from both Bowman and Kenzie, that anguish of not being blessed with mate bond, even if they have been mated for more than a decade. Because there is still possibility that one of them will find a mate bond with others – if it happens, they have to let the other go. I found that very compelling. I loved reading about them, and their cub, Ryan, was so adorable. It is clear that Bowman and Kenzie love one another so much – the idea that they might have to be separated just breaks my heart as a reader, and of course drives the romance tension in the book.

As for the action element of the book, it comes from a mysterious monster that comes out of nowhere and is destroying the area. The investigation into where the monster is coming from, and the reveal of the bad villain behind it, brings readers to a very satisfying climax. As a reader who has followed this series since book 1, I thought that Ms. Ashley built an interesting expansion of the Fae myth to the series. In the beginning, the Fae connection is mainly that they are the maker of Shifters, but for the past couple of books (and novellas), there seems to be a more complicated threat from Fae towards the Shifters, in addition to the danger from humans, of course.

The later development sure keeps me intrigued, especially since Ms. Ashley also introduces newer appealing characters – like the enigmatic Gil Ramirez, Kenzie’s Romanian wolf uncle, Cristian, a fae woman Brigid, along with other pack members. So many possibilities of new couples!