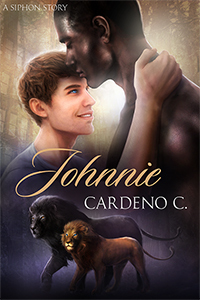 Blurb: A Premier lion shifter, Hugh Landry dedicates his life to leading the Berk pride with strength and confidence. Hundreds of people depend on Hugh for safety, success, and happiness. And at over a century old, with more power than can be contained in one body, Hugh relies on a Siphon lion shifter to carry his excess force.

When the Siphon endangers himself and therefore the pride, Hugh must pay attention to the man who has been his silent shadow for a decade. What he learns surprises him, but what he feels astounds him even more.

Two lions, each born to serve, rely on one another to survive. After years by each other’s side, they’ll finally realize the depth of their potential, the joy in their passion, and a connection their kind has never known.

As Premier lion of his pride, Hugh has more power than anyone and the only person who’s keeping that power from killing Hugh is his siphon, Johnnie. Unfortunately, for the past decade that Johnnie’s been with Hugh, Hugh’s ignored him. It isn’t until Johnnie can’t take the loneliness and tries to end it, does Hugh finally take notice. When he does, he realizes how much he’s missed when the connection to Johnnie makes him feel more complete than he’s ever been. But when their newfound happiness is threatened, will Hugh be able to save Johnnie before it’s too late?

This story was soooo adorable. I really loved that Johnnie was so naive and, well, lonely. I hated how he was treated by Hugh, but at the same time, I really liked that there was that ‘been right in front you this whole time’ element to it. I also really liked that Hugh was so protective and caring of Johnnie once he embraced what Johnnie could mean for him.

I really enjoyed this one but I had two issues. One, there was too much sex for my tastes and, two, I didn’t really like Hugh as a character at first. I mean, I couldn’t really understand how he didn’t notice Johnnie at all for a decade when he lived with the man the whole time. However, towards the end, when he started to get very protective of Johnnie, is when I started to like him.

In the end, this was another good story by Cardeno. I really enjoyed the world that was created and I absolutely ADORED Johnnie. I also liked how Hugh taught Johnnie how to be a lion and showed him everything he was missing. I can’t wait to see what comes next in this series and hope we don’t have to wait too long for it!