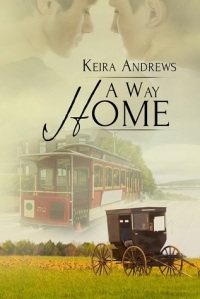 Blurb:  Will returning to their Amish roots renew their faith in each other?

Isaac and David never thought they’d go back to the Amish world. But when Isaac’s younger brother is stricken with cancer, they don’t hesitate to return. Their relationship is on the rocks after insecurity and fear drove a wedge between them in San Francisco, and David is determined to make things right. Yet if they thought navigating “English” life was confusing, being back in Zebulon is even more complicated.

Their families are desperate to bring them back into the fold, and pressure from the community builds. Isaac and David yearn for a future together, but each day it becomes harder to hide the truth about who they really are. They’re caught between two worlds, and if they’re not careful it could tear them further apart.

Can Isaac and David make their way back to each other—and find a place to call home?

This is the final chapter in a trilogy of forbidden Amish love.

Review: Isaac and David return to their Amish home when Isaac’s brother falls ill and it looks like he might need a transplant. Aaron also goes with them to see if he can be a match.

When they get there, Aaron is still being treated like a pariah and though Isaac isn’t much better, his parents try very hard to convince him to come back to the fold since Aaron is a lost cause.

Meanwhile, David explains himself to Isaac and must make peace with himself and hopefully his family while at the same time admitting that he must stop drinking and acknowledge the panic he’s been feeling.

Though Isaac feels tremendous guilt and feels his loyalties to his family drawing him back, their close-mindedness and reluctance to do the right thing in the face of harrowing circumstances reminds him that he has found who he really is and that person cannot live the life his parents would want.

I was so glad to finally give Isaac and David the closure they needed. It was so hard watching David fall apart when he’d been so strong in the first book. I liked that Isaac had to face his family again and that he stood up for Aaron as well. It bothered me that no one seemed to acknowledge that part of the family and the gaping hole that had been left behind.
Of course the parents still come across so narrow-minded and blinded by religion that you want to shake someone, but at least there is a glimmer of humanity seen when Isaac’s dad finally talks with Aaron like the son he is.

I loved the ending, the sense of hopefulness we are left with, and I hope that maybe Keira Andrews might tell us some of the stories of the other brothers left behind, as they seem to have a story to tell as well.