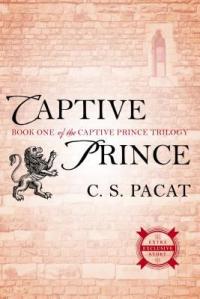 Blurb:  “This was Vere, voluptuous and decadent, country of honeyed poison”
Damen is a warrior hero to his people, and the truthful heir to the throne of Akielos, but when his half brother seizes power, Damen is captured, stripped of his identity and sent to serve the prince of an enemy nation as a pleasure slave.

Beautiful, manipulative and deadly, his new master Prince Laurent epitomizes the worst of the court at Vere. But in the lethal political web of the Veretian court, nothing is as it seems, and when Damen finds himself caught up in a play for the throne, he must work together with Laurent to survive and save his country.

For Damen, there is just one rule: never, ever reveal his true identity. Because the one man Damen needs is the one man who has more reason to hate him than anyone else…

Review: Chained down, unable to even use the restroom. Surviving on meager amounts of food and sleep. No, I’m not talking about one of the characters in Captive Prince. I was the one held captive. The first novel of the series was my master and it was sometimes cruel, sometimes beautiful.

You know how they say the book is always better than the movie? Now think about shows like Game of Thrones and The Tudors. Captive Prince is like that, only it’s a book, and therefore so much better! The action starts right away as Prince Damianos is forced into slavery and given as a gift to his worst enemy. Instantly I notice the level of descriptive detail and the intricacy of the plot. I could almost see Damianos standing in the bath, naked and furious as he’s prepared. I could smell the oils and feel the fabrics. Pacat brings every detail into focus.

Arriving in the neighboring kingdom, we’re introduced to Prince Laurent. First impressions are made and he comes off as haughty and spoiled, but it doesn’t take long to realize there’s so much more to him. One of my favorite things about this story is the hidden details, the little clues; bits and pieces of truth being left like a trail of bread crumbs. The pacing is absolutely amazing! The story is fed to us, slowly so we can savor the taste.

Another favorite? The incredibly tense hostility between Laurent and Damianos. The hatred is bone deep and the way they treat one another, it’s hard to even imagine them becoming friends let alone lovers, yet the author builds one of the most solid and deep connections between the two men. In the first book of the series, we see some of these changes and the framework for what their relationship will eventually become. Don’t expect any amount of romance in this first installment. I will, however, tease you with the fact that there is some heady sexual tension!

If you aren’t yet convinced, then let me tell you that this story has won awards and garnered huge amounts of attention for a reason. There are so many characters and subplots, so much treachery and yet loyalty and honor. Some chapters will make you cringe, some will flay you and some will make you want to hit something. It’s truly like a TV mini-series, except it’s written word. And, man, the book is absolutely better than any movie!

One thought on “Book Review: Captive Prince: Volume One by S.U. Pacat”