Book Review: A Counselor Among Wolves by Liv Olteano 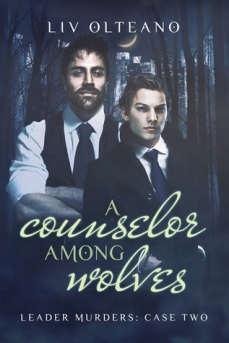 Blurb: Five dead leaders, their bodies arranged in a pentagram. Treason, lies, and backstabbing. A make-believe affair that turns into a real mating.

Timothy Sands is a PBI counselor, half-fey, half-elf, with a secret crush on Herman Weiss, PBI director. As a new chapter is added to the Leader Murders, it is Weiss’s responsibility to investigate what seems an impossible-to-solve case. The other problem? Weiss is suffering from rages, and his only salvation lies in Tim’s emotional-grid-balancing skills. They only have to pretend to be a couple for Tim to use his talents, and he owes Weiss a big favor. Piece of cake, right?

The fey might be involved in the Leader Murders. Someone on the Council might be their ally, and another prominent PBI figure looks more and more suspicious as they investigate. The stakes are upped when Timothy’s father, the Fey King, threatens to leave the Council destitute if they don’t hand Timothy over to him. Weiss’s brilliant solution? Mating Timothy and forcing the Council into protecting him.

There’s only one small hitch in that plan: instead of protecting one, the Council might decide to get rid of two.

When Weiss realizes he’s developing rages that could cost him his career, he does the only thing he can think of and asks Timothy Sands for help. Except, Weiss doesn’t just want some counseling… he wants Tim to fake being his lover until they can figure out what’s causing the rages and how to solve the Leader Murders. It should be a simple task… except for the fact that Tim’s been secretly yearning for Weiss for five years now and Tim reminds Weiss too much of his dead lover. When betrayal strikes too close to home, will Weiss and Tim be able to save their careers and their lives?

Oh my GOD. When I saw this book, I was SO EXCITED I could not WAIT to start it. It’s been months since I read A Tooth for a Fang, a book I absolutely adored, so seeing that the sequel was out, really made my day! And let me just say I WAS NOT disappointed. This story held just as much intrigue and appeal as the previous one did. I loved the dynamics between Tim and Weiss and how Tim wasn’t afraid to stand up to Weiss. I also loved that he was so good at ‘mind-fucking’ as Weiss put it but that underneath all the cockiness, he was just a lonely guy yearning for an unattainable man. At the same time, Weiss was definitely my favorite. I loved that he was so big and strong but could be so tender and loving. It was amazing to see how he could be this scary director but then be soft and gooey when it came to Tim and his son.

My only issue is that I wish there was more depth to the pack. I wanted to get to know more about them and their culture… their reactions when they have to accept Tim as a part of the pack and just generally getting to understand more of how they ‘are’.

All in all, another fabulous story in this series. I’m absolutely loving where this storyline is going and I’m really looking forward to seeing where things go next. I’m sort of hoping they go more into the fey but I also really love the wolves and such so still hoping we get tons more of them!

6 thoughts on “Book Review: A Counselor Among Wolves by Liv Olteano”