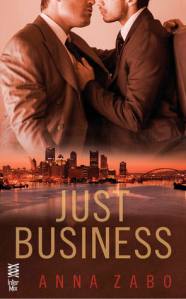 Blurb:  Justin White may not look like an up and coming corporate superstar, but his new boss knows he has the smarts, grit, and determination to succeed. Now he just has to convince his company’s CFO, Eli Ovadia. Unfortunately, Justin can’t seem to keep his cool around the domineering Eli—and soon he finds himself taking their heat from the boardroom into the bedroom….

Still haunted by a tragic accident that left him with a wounded leg and broken heart, Eli has a need to be in control. But his desire for Justin makes him want to lose that control—and push them both far beyond their limits. But will his need to dominate Justin drive him away—or will Eli find a way to be the man he needs for both of them?

Review: This book follows Takeover, and while Michael and Sam are involved, this can easily be read as a stand alone. I definitely recommend you read their story as well, however, to give you a good idea about how the players all ended up where they are.

Eli is a bit of a cold fellow, though he has some very solid reasons that explain his behavior. A tragic accident when he was a teen left him permanently damaged physically, as well as a bit emotionally, and he has built quite a strong wall around himself as protection.

Justin is pretty much the opposite. After an abusive relationship left him and his career in shambles, he made a complete 180 and took his life back. He is currently working in a coffee shop, sporting a goth look and maintaining his vow to never be owned by someone else ever again.

So, Eli and Justin are like oil and water. Justin works up the courage to apply for a job with Sam (and Eli) and passes the interview with flying colors. Eli does not make it easy for Justin, but it is clear that Justin easily gets under Eli’s skin. They both find it hard to resist, but they continually fight it – sometimes rather heartbreakingly. When they let it go, they are unbelievably hot together. As I said, neither can resist the pull for long, even when their fears and emotions get in the way. Of course, lack of communication plays a big part.

I really enjoyed this story, as it had a little bit of everything – damaged characters, disabilities, enemies to lovers, smoking sex scenes, and a bit of angst. The HEA was a nice touch as well. I definitely recommend picking up this series. I’m looking forward to seeing where things go from here and hope to see all of these guys again.