Book Review: In the Middle of Somewhere by Roan Parrish 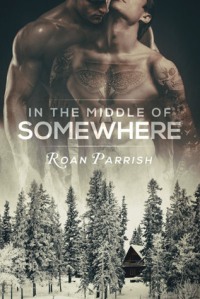 Blurb:  DANIEL MULLIGAN is tough, snarky, and tattooed, hiding his self-consciousness behind sarcasm. Daniel has never fit in—not at home with his auto mechanic father and brothers, and not at school where his Ivy League classmates look down on him. Now, Daniel’s relieved to have a job at a small college in Northern Michigan, but, a city boy through and through, when Daniel arrives in Holiday, Michigan, it’s clear that this small town is one more place he just won’t fit in.

REX VALE clings to routine to keep loneliness at bay: honing his large, muscular body until it can handle anything, perfecting his recipes, and making custom furniture. Rex has lived in Holiday for years, but his shyness and imposing size have kept him from connecting with people. Though he loves the quiet and solitude of his little cabin in the woods, Rex can’t help but want someone to share it with.

When Daniel arrives in Holiday, they are smitten with each other, but though the sex is intense and explosive, Rex fears that Daniel will be one more in a long line of people to leave him, and Daniel has learned that letting anyone in could be a fatal weakness. Just as they begin to break down the walls that have been keeping them apart, Daniel is called home to Philadelphia where a secret is revealed that changes the way he understands everything.

Review: This was a sweet story that surprised me a bit. I was expecting a sweet story with a bit of fluff, but there is quite a bit more to these characters that evened out that aspect and kept me invested through to the end.

Daniel is the young professor who overcame the many issues of his youth, not the least of which was his almost completely unsupportive family, to become an English professor. He takes a job in a little town in Michigan as a means of getting in the door as a step to a more prestigious university.

A mishap with a sweet dog brings Daniel and Rex together. Rex was amazing. He’s a big softy of a bear who lives in a cabin he built/renovated himself. He works as a carpenter and general Mr. Fix-It around town. Rex is just a big ole caring hunk of a guy and it shows in the bedroom and out.

Unfortunately, there are some miscommunications or lack of any that cause these two some problems. Rex holds back because he’s afraid Daniel is just biding his time until a better job offer comes up somewhere else. And Daniel is just as confused himself. He has feelings for Rex, but are they enough to give up everything he’s worked for to get that perfect job?

There was a bit of family drama with Daniel’s screwed up brothers adding a few ups and downs, but through it all, Rex was there for Daniel. While I did wish we had gotten to see more of Rex’s side of things, Daniel kept things interesting. I’m not a big fan of first person, present tense, so this kept throwing me off throughout the story as well. I also wish there had been a bit more focus on them and their relationship, because at times, I felt myself wanting to skim over the “other” stuff.

I’m not so sure I’m very interested in reading more about Daniel’s brother, Colin, but Rex’s friend, Will, and their new friend, Leo, definitely had something interesting going on. This book is a bit long and could definitely have been cut back some in certain areas, but, all in all, I found it rather enjoyable.