Book Review: Valor on the Move by Keira Andrews

Posted on September 10, 2015 by thebloggergirls 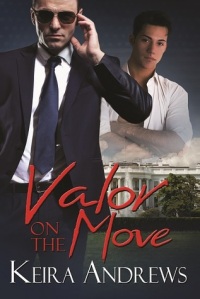 Blurb:  He’d give his life to protect the president’s son. But he never expected to risk his heart.
Growing up gay in the White House hasn’t been easy for Rafael Castillo. Codenamed “Valor” by the Secret Service, Rafa feels anything but brave as he hides in the closet and tries to stay below the radar in his last year of college. His father’s presidency is almost over, and he just needs to stick to his carefully crafted plan. Once his family’s out of the spotlight, he can be honest with his conservative parents about his sexuality and his dream of being a chef.

It’s definitely not part of Rafa’s plan to get a new Secret Service agent who’s a walking wet dream, but he’s made it this long keeping his desires to himself. Besides, it’s not like Shane Kendrick would even look at him twice if it wasn’t his job.

Shane’s worked his way up through the Secret Service ranks, and while protecting the president’s shy, boring son isn’t his dream White House assignment, it’s an easy enough task since no one pays Rafa much attention. He discovers there’s a vibrant young man beneath the timid public shell, and while he knows Rafa has a crush on him, he assures himself it’s harmless. Shane’s never had room for romance in his life, and he’d certainly never cross that line with a protectee. Keeping Rafa safe at any cost is Shane’s mission.

But as Rafa gets under his skin, will they both put their hearts on the line?

Review: You know that feeling when you finish a book and want to turn around and start it all over again? Well, this book will give you that feeling – and how!

Rafa is the last kid at home, in the last year of a two-term presidency, son of the President of the U.S. He’s 21, in his last year at UVA, and desperate for the freedom January will bring when he can finally leave the White House.

He’s painfully shy and socially awkward, knows he’s gay but has never been able to act upon this with his Republican parents and living life in the spot-light. He has a girlfriend who is a lesbian and together they protect one another’s secrets until the time is right for them to come out of the closet together. In addition to hiding the secret about his sexuality, he also struggles with the expectation to follow his father into politics when all he wants to do is become a chef and learn to surf.

Shane is a secret-service agent who is excited to be moving up the ranks to the “Big Show” of presidential protection. He’s a loner: only child, no parents, few friends, no attachments romantically. He gets his needs met with f*ck buddies and the occasional hook-up and he has no desire to change that. He tells his friend that he’ll know it’s time for something more when he actually cares to wake up to the same person every Kday.

Rafa falls into instant lust with his new secret service agent but knows it can’t ever be anything real. But… he can’t help but dream. When Shane shows a bit of kindness to him and allows himself to be a guinea pig for some of Rafa’s recipes, he can’t but help hope for something more.

Shane knows he can’t be distracted by the young man in his charge. It wouldn’t be right on so many levels. But he sees the open heart and obvious crush and can’t help but be caught up with the lonely man he’s protecting.

A stolen kiss, a kidnap attempt, and a night in a cave change the course of their relationship forever.

There’s drama surrounding the kidnap, Rafa’s family finds out he’s gay and Shane’s friend in the service has both professional and family struggles that will both tug at your heart string and make you super mad at the same time.

In the end, everyone involved has to do some serious re-considering of their life choices and has to decide just what is most important in life.

Oh. My. God. I LOVED this book so hard! Rafa had me in his hands right from the start. He was so, so lonely. Such a good guy who had practically nobody to turn to. He was overshadowed by his celebrity family and left to his own devices to hide who he really was from both family and the public.

Shane was a genuinely nice guy with only a bit of angst in his past, but still a strong person who was willing to see the best thing for him in a situation that looked impossible.

I know that there are a lot of “impossible things” that happened in this story, but it was believable enough that I was on the edge of my seat the entire time. I cried so many times – the sick kids, Rafa’s high school career, Shane’s parents, the kidnapping and the ending… God! Such an emotional roller-coaster.

I loved the chemistry between Shane and Rafa and thought it was a brilliant move to make Rafa just a bit kinky when his other self was so reserved. The May/December aspect was handled well and made to seem as the least of their problems.

I thought the kidnapping part of the story was brilliant. I won’t give anything away, but I was totally on the fence between complete anger and total understanding. Brilliantly done!

My only wish was that we could have seen Shane and Rafa as a couple once the whole White House thing was over. I would have loved to see them together in Australia!

I can’t recommend this book enough. Keira is an amazing author who continually wows me with the width and breadth of the subjects she is able to master, from and Amish love affair to Zombies, she handles them all so effortlessly!

If I could give it more stars I would! 5 of 5 stars