Book Review: Property of the Alpha by Shannon West and Victoria Sue 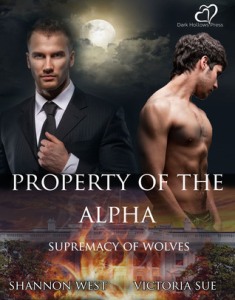 Blurb: When Quinn, the Supreme Alpha of all the Nine Territories first sees a young man in the arena, he is struck by his beauty and by the fact that despite his chains, he’s barely contained. Quinn recognizes him almost at once as the human who led an assassination attempt on him just weeks before, yet when he tries to take him into custody, he’s shocked to find the human is his fated mate. He has only one option to keep the council from executing the young man for his crimes—to make an example of Aaron, and to debase and degrade him as his love slave so that none of Aaron’s followers will celebrate him as a martyr or a hero.

Aaron is on a quest to find his brother, separated from him during the plague that devastated the population, killing seventy percent of all the humans on the planet. When he gets word that his brother is among the rebels, he joins them too, hoping to find him. Instead he gets caught up in a failed assassination attempt on the Supreme Alpha, a strong, powerful wolf shifter who now has Aaron right where he wants him–at his mercy.

Despite his growing attraction to Aaron, Quinn has to try to keep his heart from getting too involved, and when another assassination plot is uncovered, Quinn has to make a difficult decision. He must put Aaron aside despite his feelings for him and imprison him, even though the mating bond between them means Aaron will suffer and die without Quinn. And when Aaron disappears and word gets back to Quinn that he’s dying, he has to take a leap of faith to bring him home and back to Quinn’s bed where he belongs.

Review: I have mixed feeling about this story. I liked it, but I didn’t. Sounds a bit confusing, I’m sure, yet that was how I felt throughout the story…confused. And the ending was too easy, too fast, and I was left needing a little more. From start to finish, I was comparing this to The Planet of the Apes, but instead of apes the humans are pets and servants of wolves.

Alpha Quinn was shocked to find himself mated to a human, a human that had tried to kill him. Aaron is not a killer, he is not anything he was accused of, but he reaped all the humiliation and consequences of someone who was. Quinn, who forced Aaron to call him Master…even at the end when the truth is revealed, was a difficult man to love, and I had mixed emotions where he was concerned. Aaron deserved better…better than the wolf/man he was forever mated to and better than the brother who allowed his capture to begin with. Did those two come to terms at the end, yes, but I would be hard pressed to forgive either of them.

I enjoyed the fact that Quinn pierced and tattooed Aaron. It was a fitting punishment for a man believed to be a rebel leader and killer. However, Quinn forcing the mating bite on the man he had no plans of ever loving and insisting on humiliating him was just a bit odd. I got it, but I didn’t. A wolf protects and loves his mate, and I didn’t feel that with Quinn. Again, I sound a bit confusing and I apologize. I am still trying to wrap my mind around this story and get a better grip on my thoughts. Will I read the next book? Yes. Was I entertained? Yes. But it was missing something and I am hopeful that I find it in the next book.

There are many instances in a series where I give 3 stars to one book and 5 stars to another. I am hopeful that this will happen here because I really enjoyed the wolf-controlled earth and look forward to seeing how this world plays out.