Posted on December 6, 2015 by thebloggergirls 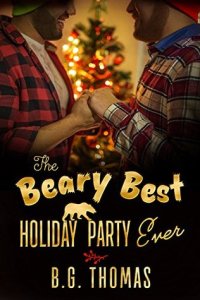 Blurb:  Before he discovered the Heartland Bear Clan, Ron Corbin figured no one could ever love a “fatass” like him. But the big group of big men accepts him, and likes him just the way he is. Having finally found a place he belongs, he works hard to get elected president of the club—and wins. He’s the happiest he’s ever been.

But Paddy Brennan, a sexy bear cub who blew into town and became Mr. Popular overnight, is elected vice-president. Ron doesn’t think Paddy has earned the honor, and now he’ll have to work shoulder to shoulder (and belly to belly) with the guy for a year.

Ron will do what’s best for the club even if that means setting his personal feeling—that Paddy is a jerk—aside. But then as the two men get to know each other, Ron reluctantly finds he not only likes the guy, but is growing more and more attracted to him.

Deep down, Ron still worries he isn’t good enough, but maybe Paddy can show him there’s a beary happy ending waiting for them after all.

Review: Poor Ron. As a boy, in the hands of fitness freak parents, he was constantly told he was a “fatass” and made to feel less-than for being overweight. When he meets Paddy via a Craig’s List ad, he thinks he’s found the perfect guy. But Paddy says something that sets Ron off and now he “hates” Paddy.

Paddy and Ron end up being elected as President and Vice-President of their bear club and together must work on planning the big Holiday Party at the end of the year.

Over the coming weeks, it becomes clear that – even though he shouldn’t – Ron still has a crush on Paddy and for whatever reason, Paddy keeps flirting with him!

This is a super sweet holiday treat! There is a “Big Misunderstanding” that keeps Paddy and Ron from being a couple – which usually annoys the crap out of me, but in this case is handled very well and realistically. Ron just tugs at your heartstrings and Paddy is a great guy, too.

What I most liked, however, was how the bear club served as such an important place in Ron’s life. It gave him (and others like him) a place to be himself and feel pride at what others scorn.

It’s a very touching and sweet story and the romance is great, too!

One thought on “Book Review: The Beary Best Holiday Party Ever by B.G. Thomas”