Book Review: Blame it on the Fruitcake by Pat Henshaw

Posted on December 12, 2015 by thebloggergirls 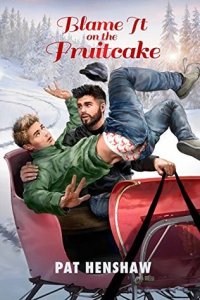 Blurb:  Fruitcake is the laughingstock of the holiday season. But can it be an aphrodisiac instead? Motorcycle mechanic Sam McGuire is surprised to find a gaily wrapped box on his doorstep with a piece of fruitcake accompanying an invitation to a holiday party.

Wondering if he’ll fit in, Sam attends the party—mostly to get more of the fruitcake he falls in love with—and meets Jay Merriweather, his new neighbor. The lure of Jay’s big family and its holiday tradition of enjoying Grandma’s fruitcake hook Sam, as does the sexy man himself.

But Sam can’t imagine why handsome, college-educated Jay would want someone like him, who was raised in a children’s home and barely graduated high school. Maybe the magic of the holiday season can help two men who seem so different come together like the ingredients in a well-made fruitcake.

Review: Sam is shocked when his neighbor gives him his very first Christmas present and an invite to a party. He’s even more shocked that the present is fruitcake and that he LOVES it. He decides that the neighbor can’t be all bad and if the chance for more fruitcake comes with a party invite, he might as well go.

When Sam gets to the party, he’s happily surprised again by meeting his neighbor, Jay. Jay is everything Sam isn’t – white collar, tidy, educated, polished, from a loving family. Sam talks himself out of believing Jay is as attracted to him as he is to Jay – for awhile. Eventually the evidence leans enough the other way that Sam agrees to some “dates”.

These dates go very well – so well that Sam is thinking he may have found something special. But just when things begin to look bright for this holiday season, something reminds him that Jay is everything Sam can never have…

I always have a hard time reviewing Pat Henshaw’s stories. On the one hand, I love the writing, the blue-collar characters, the sweet story lines and the simple emotions involved. On the other hand, I always feel a little let down by the end. Not because the story isn’t good, just that it seems to always end too soon.

I don’t mind the fade-to-black sex scenes – though I’d love it if that weren’t the case * wink – but I do wish that the ending was a little bit more drawn out. Sam spends so much time in his head waffling about his feelings of inadequacy and then POW, in one paragraph, the two reconcile and POW the story is over.

I loved the “epilogue” ending – always a favorite of mine – and I did feel these guys got a really nice HEA – I just wanted the “big talk” between the two MCs to cover more than a paragraph or two before they reconciled so it felt more authentic.

All in all, I really enjoyed this play on “fruitcake, the most misunderstood of all holiday treats,” and I do recommend it.

One thought on “Book Review: Blame it on the Fruitcake by Pat Henshaw”