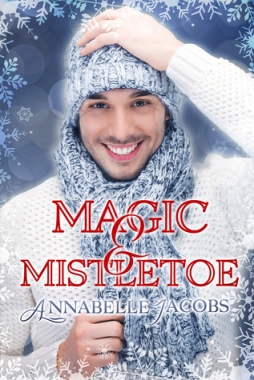 Blurb: Christmas is Harry’s favourite time of the year, but it looks like he’ll be spending it alone. When it comes to the men he fancies, his luck is non-existent. Harry’s nerves always get the better of him—especially when he tries to talk to Andrew, the hot guy downstairs.

Everything changes when Harry meets a mysterious girl in the woods who professes to be a witch. He dismisses her claims, but when odd things start happening to him, he has to reconsider.

Andrew was attracted to Harry from the start, but their awkward encounters put him off. All goes well until Harry opens his mouth—and ruins it with his stupidity and silly comments. When Harry suddenly becomes more relaxed and they have a proper conversation, Andrew realises his first impression was wrong. As the days count down to December 25, they get swept up in the Christmas spirit and their relationship moves faster than either expected.

A little winter magic might have been the push they needed, but Harry worries that when it wears off, he’ll no longer be the man Andrew wants.

Harry’s out walking with his friends in the woods when he comes across a witch and unintentionally insults her. But instead of being angry, she decides to help Harry by making him think before he speaks, which seems to be a huge problem when he’s around his neighbor and crush, Andrew. Despite the attraction he has for Harry, Andrew’s not to keen on the things Harry says so when Harry stops stating the obvious, Andrew realizes there’s actually a really sweet and nice guy under all that attitude.

This was a really cute story! I liked the spin on the whole ‘witch’ helping Andrew out but I also liked the awkwardness between Andrew and Harry. Harry was adorable with the way he would stick his foot in his mouth whenever he was around Andrew. Andrew was a bit of a mystery but I found it interesting that he considered Harry an asshat when Harry would say something stupid. My only issue is that I DIDN’T like that Andrew considered Harry an asshole just because he’d ask questions that stated the obvious so it made me not really like Andrew as a character.

All in all, though, this was still a good story if you’re looking for a cute Christmas story. I liked the premise and when Harry/Andrew finally get together so I really hope this won’t be the last of them… although, I’d like to see more of this ‘witch’ who helps Harry in the future!