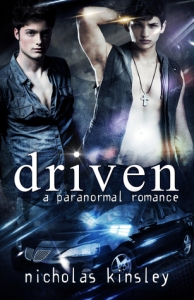 Blurb:  Mitchell Morgan is a quiet young man with dangerous secrets. One of those secrets is a psychic power over metal that makes him far more than just the handsome, blue-eyed owner of Advanced Auto Repairs. The other traps him in a world of organized crime and intense violence.

Trevor Lewis is a graphic designer with a passion for drawing, drumming, and his incredibly hot auto mechanic. He meets Mitchell over a broken tail light, and despite – or perhaps because of – Trevor’s awkwardness, Mitchell is charmed. Trevor’s curly hair and brilliant smile bring light into Mitchell’s complicated world. Mitchell would do anything to save Trevor from the dangers of his criminal life — but first Trevor has to save Mitchell from his own darkness.

Review: This story had a lot of potential, but I found I was confused and conflicted throughout most of it. It contains graphic violence, beatings and rape.

It is about Mitchell, who is able to manipulate metal, the extent of which, he keeps a closely guarded secret. Through the use of his special skills, he became a very successful (undefeated) street racer, but that put him in the path of an evil organized crime leader who he is now indebted. He is forced to race for the man, as well as be his executioner any time it is “requested.” These scenes are quite graphic and disturbing and caused some conflicted feelings for me as to Mitchell’s character. It is understood that Mitchell doesn’t have any choice in the matter and even wants out, but when performing his duties, it is a bit difficult to see.

Trevor brings his car to Mitchell’s garage and is intrigued. Even through Mitchell tries to keep his distance, Trevor’s persistence pays off and Mitchell gives in. Trevor is in complete contrast to Mitchell. He is good, where Mitchell has all these dark secrets. It was hard to see how these two would ever work out given their differences. By the time the secrets are all out, Trevor is too in love with Mitchell to look the other way. I really would have liked to have seen more involving Mitchell’s metal skills, even though they are what saved everyone in the end.

There is a gender queer character, Kay, who didn’t so much confuse me as just kept pulling me out of the story. Any reference is made to them, they or themselves which constantly threw me off. Kay didn’t play a very big role, but enough so that I remembered to comment about it.

Mitchell’s original dialect, mostly during the times when he visits his mum, was a little difficult to follow. I had to read a few times to understand what was being said. I usually like hearing different aspects of people’s origins, but this one was hard to follow. Perhaps that’s just the way it is there, but as a reader, I had some trouble with it.

Even though this one didn’t completely work for me, I was definitely intrigued enough by other aspects of Mr. Kinsley’s writing that I am definitely interested in reading more of his work.